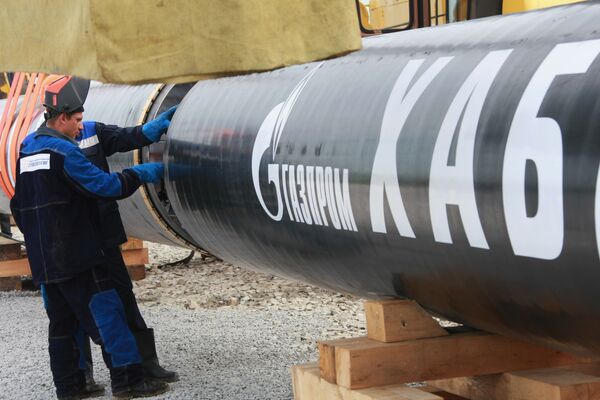 France's Electricite de France (EDF) has agreed with Russia's Gazprom on its participation in the South Stream gas project, the Russian prime minister said on Friday.

France's Electricite de France (EDF) has agreed with Russia's Gazprom on its participation in the South Stream gas project, the Russian prime minister said on Friday.

The pipeline, scheduled to be completed by 2015, is part of Russia's efforts to cut dependence on transit nations. It is a rival project to the EU-backed Nabucco, which would bypass Russia.

"This is what we did before, only with our German partners," the Russian premier said, referring to another gas pipeline, Nord Stream, that Russia is building jointly with Germany to pump Russian natural gas to Europe under the Baltic Sea.

Earlier in November, Putin signed a final agreement with Russia's partners on building and utilizing the South Stream gas pipeline, which will run through several European territories, including Slovenia, as well as through the Black and Adriatic seas.

The Russian and Slovenian energy ministers also signed an intergovernmental agreement on cooperation in building and using the South Stream gas pipeline in Slovenia in November.

The 25 billion-euro ($36.5 bln) project is designed to annually pump 31 billion cubic meters of Central Asian and Russian gas to the Balkans and on to other European countries, bypassing Ukraine, which has frequent disputes with Russia over gas supplies and transits. The pipeline's capacity is expected to be eventually increased to 63 billion cubic meters.

EDF is one of Europe's leaders in the production, transportation, distribution and deliveries of electricity and natural gas. EdF runs 19 nuclear power plants with 58 operating reactors, as well as thermal, wind and hydro power plants and transmission and distribution lines.

"Our French colleagues will become minority shareholders of the South Stream project, of its sea sector," Alexei Miller said.