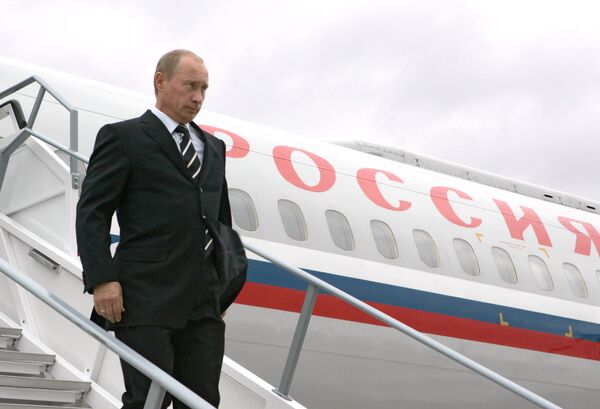 Russian Prime Minister Vladimir Putin will start a two-day visit to France on Thursday, during which the two countries may finally agree on the purchase of a French Mistral-class amphibious assault ship.

MOSCOW, November 25 (RIA Novosti) - Russian Prime Minister Vladimir Putin will start a two-day visit to France on Thursday, during which the two countries may finally agree on the purchase of a French Mistral-class amphibious assault ship.

Yury Ushakov, a deputy head of the Russian government staff, said Putin's visit agenda does not envision Mistral talks but said the issue "could be discussed."

If the deal is signed, the Mistral will be the largest vessel Russia has ever bought, according to experts. The Mistral, worth 400-500 million euros (around $600-$750 mln), is inferior in size only to Russia's sole aircraft carrier, the Admiral Kuznetsov.

A Mistral-class ship is capable of transporting and deploying 16 helicopters, four landing barges, up to 70 vehicles, including 13 battle tanks, as well as 450 military personnel. The vessel is equipped with a 69-bed hospital and can be used as an amphibious command ship.

The Mistral arrived on an official visit to St. Petersburg on Monday.

Ushakov told journalists that the visit would start with an informal dinner with Putin's French counterpart Francois Fillon, and the two men would probably touch upon the Iranian nuclear program as "the topic has been discussed at all levels."

On Friday, Putin and Fillon will take part in the 14th meeting of a Russian-French commission on bilateral cooperation. The meeting will discuss preparations for a Year of Russia in France and a Year of France in Russia, scheduled for 2010, as well as labor migration and child adoption.

According to Ushakov, Russian energy giant Gazprom and France's Electricite de France (EdF) will sign a memorandum of understanding during Putin's visit.

Ushakov said a number of top-level visits are planned during the Year of Russia and France and the Year of France in Russia in 2010.

"Preliminarily, I can say Russian President Dmitry Medvedev's visit to Paris is envisioned. French President Nicolas Sarkozy may visit Russia twice," he said, adding that Putin is also expected in France in 2010.

Ushakov also said Putin would meet with ex-French president Jacques Chirac. There will be no meeting with President Nicolas Sarkozy as he will be on a visit to Brazil and Trinidad and Tobago.

However, trade between the two countries decreased by 28.5% year-on-year to $3.3 billion in the first quarter of 2009 amid the global credit crunch.