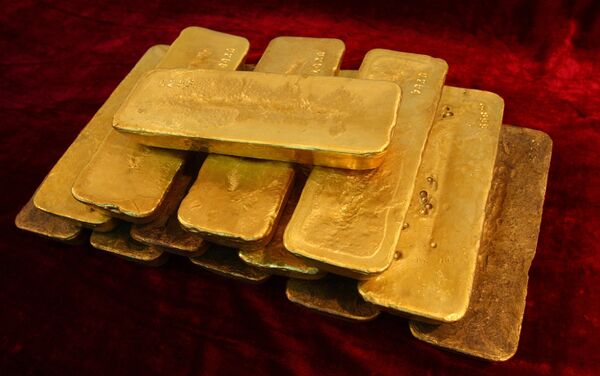 On November 23, gold hit $1,174 per troy ounce in morning trading in New York before December contracts fell back but still added $18 on the session to $1,164.80 per troy ounce.

On November 23, gold hit $1,174 per troy ounce in morning trading in New York before December contracts fell back but still added $18 on the session to $1,164.80 per troy ounce.

The previous record-breaking $1,164 per troy ounce, posted by Hang Seng, the leading index for shares traded on the Hong Kong Stock Exchange, did not last a week.

Gold prices have soared by 32% since early 2009. The greatest increase was posted in the third quarter. Since early fall, gold prices rose by 24%. A troy ounce may cost over $1,200 before the year is out.

According to analysts, current gold-price hikes imply that the bottom is about to fall out of overheated speculative markets.

Economic problems or fears are always followed by frenzied precious metals demand. The previous "gold fever" began just over a year ago when the global financial and economic crisis was in full swing. In September 2008, global gold sales skyrocketed, as scared investors and private individuals rushed to buy gold bullion, coins and jewelry. The United States Mint even doubled gold coin production.

This is hardly surprising because gold becomes the bulwark of stability and an attractive investment option when the banking system is unstable, and when stock markets bottom out almost every day.

A year ago, analysts predicted that investment in gold would remain the most reliable short-term option, and that a troy ounce would cost over $1,000 by late 2009.

Although the economy differs from that of last fall, this forecast has now come true and analysts predict further gold price increase.

The economic crisis is receding, and analysts claim that the downturn will end soon and the global economy will start to recover. A barrel of oil has cost at least $60 in the past six months.

However, there are several reasons for buying gold. First, the jewelry industry needs more gold than before. The World Gold Council (WGC), an industry association of the world's leading gold mining companies, established in 1987, estimates that third quarter demand has increased by 17%. However, WGC statistics imply that the investment demand of private and institutional investors, including banks and investment funds, is a major factor affecting rising demand.

What are speculators afraid of? Some analysts are confident that an increasingly weaker dollar and predictions that it will continue to sag are forcing them to buy gold. Moreover, inflation is bound to increase as the recession ends.

Other analysts believe that speculators want to diversify their investment fearing further economic upheaval, all the more so as a second wave of the crisis has been predicted.

According to Yevgeny Fyodorov, chairman of the Russian State Duma's economic policy and business committee, the global economy will be hit by another all-out economic crisis, rather than a second wave in this recession, in the next three to five years because global economic problems that caused the current downturn remain unsolved.

Igor Nikolayev, director of the department for strategic analysis at FBK, one of the first private auditing firms in Russia, said rising gold prices heralded the upcoming crash of speculative markets.

Most countries decided to invest in the financial sector, viewing this as a core anti-crisis measure. Those banks which received budgetary funding placed surplus liquid assets on commodities and stock markets, thereby inflating new financial bubbles. According to Nikolayev, such bubbles will start bursting in the next three to four months.