Russia face all or nothing World Cup clash against Slovenia 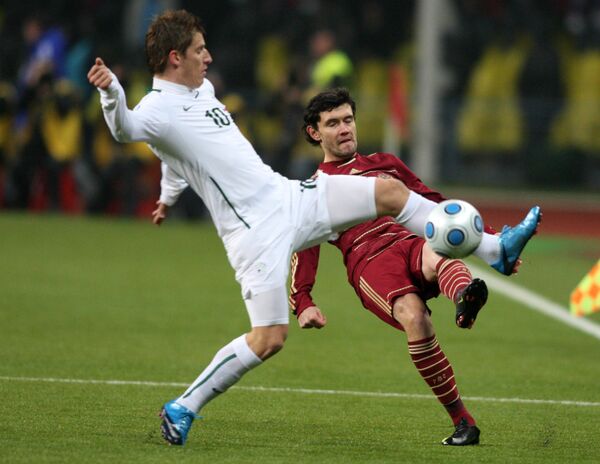 Russia take on Slovenia in Maribor on Wednesday evening in a match that will decide one of the final four European spots for the 2010 World Cup.

Russia take on Slovenia in Maribor on Wednesday evening in a match that will decide one of the final four European spots for the 2010 World Cup.

Guus Hiddink's side beat Slovenia 2-1 in the first leg of the play-off on Saturday in Moscow, with Everton's Diniyar Bilyaletdinov scoring twice before a late goal from Nejc Pecnik silenced the capacity crowd at Luzhniki stadium and handed Slovenia a lifeline.

"Of course, I was disappointed with the result," Hiddink was quoted as saying by FIFA. "We were leading 2-0 and had plenty of chances to increase our advantage."

"But there's no need to go from one extreme to another. We did not lose the first match, we won it. And there's no room for panic...We are going to Slovenia in a brave mood."

Russian striker Dmitry Sychev, who replaced Tottenham Hotspur's Roman Pavlyuchenko late in the game on Saturday, is certain that Russia has what it takes to go through.

"We don't need to change anything," he told Sport Express. "We played excellently and controlled the situation. We just need to step on the pedal a bit."

"Of course, we were all very annoyed after Saturday's game," Arsenal's Andrey Arshavin, who had a quiet game by his standards in Moscow, told the same paper.

"But everyone is back to normal now. There's no depression, but we do feel a certain wariness. But on the whole, everything is calm."

"We understand very well that the Slovenes will get powerful support on their home ground, and we will need to withstand this."

"If we miss the World Cup, we will be on the sidelines of the world game for a while," he added. "That says it all."

Russia will be backed by about a thousand travelling supporters, including President Dmitry Medvedev, who has flown to Slovenia for the game.

In other play-offs in Europe on Wednesday, Bosnia-Herzegovina host Portugal after losing the first leg 1-0, Ireland travel to Paris after losing by the same score to France in Dublin, and Ukraine take on Greece in Kiev after a goalless draw in Athens.