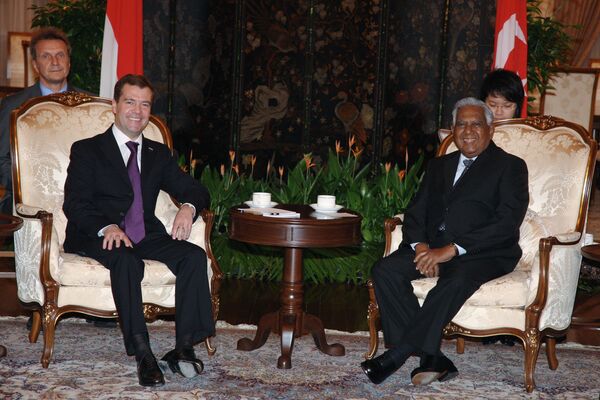 © POOL
/
Go to the photo bank
Subscribe
Singapore will continue providing assistance to Russia in developing free economic zones, the Russian and Singapore leaders said in a statement adopted on Monday.

Medvedev's visit to Singapore, the first by a Russian leader, follows the annual meeting of the 21-nation Asia-Pacific Economic Cooperation forum on Saturday, which pledged to curb protectionism and ensure an economic recovery and sustainable growth.

"Singapore will continue to play an advisory role in Russia's Special Economic Zones," the document said.

The document also said that interest among businessmen in the annual Russia-Singapore Business Forum was growing.

"Both parties expressed support for the efforts of the international community through the G20 process. They also agreed that creeping protectionism, particularly during the current financial and economic crisis, could not be tolerated," the document said.

The parties also agreed that there was potential for enhancing defense exchanges and security cooperation between Russia and Singapore, the document said.

According to the document, Moscow and Singapore are convinced that the Joint Declaration between the Russian and Singapore Defense Ministries on the exchange of military delegations signed in 2008 will lead to more contacts between the defense establishments of the two countries.

Singapore President Sellapan Ramanathan and Prime Minister Lee Hsien Loong will pay visits to Russia at the invitation of the Russian president, the document said.