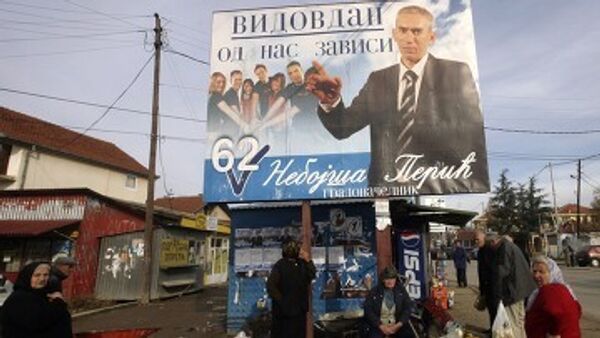 The elections were held in 36 municipalities on Sunday, with more then 1.5 million people eligible to vote for mayors and local council members.

Kosovo's President Fatmir Sejdiu said the elections "were considered a 'democracy test' in the country."

The elections were monitored by 22,096 observers, with several international organizations, including a delegation of the European Parliament, involved.

EU special representative in Kosovo and head of the International Civilian Office Pieter Feith expressed his satisfaction with the Serb turnout.

"Stakes are high for the Serb community", the Serbian B92 news network quoted him as saying.

However, Minister for Kosovo and Metohija Goran Bogdanovic said a "small number of Serbs voted in the illegitimate local elections called in the province by the temporary institutions", the news network reported.

"All those who participated in the elections must be aware of the fact that they can in no way represent the Serbs in Kosovo," Bogdanovic was quoted as saying in a statement by the Serbian Beta news agency.

Kosovo Serb politician Rada Trajkovic, who supports local elections in Kosovo, said "participation in the elections does not mean the recognition of Kosovo's independence, which was unilaterally declared and was not recognized by the majority of members of the international community."

A total of 62 countries, including major Western powers, have recognized the independence of Kosovo, declared in February 2008. The rest of the world, including Russia, China and India, considers Kosovo to be part of Serbia.