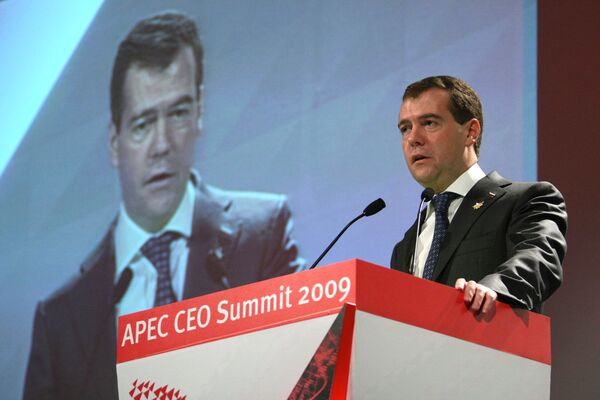 © POOL
/
Go to the photo bank
Subscribe
Russian President Dmitry Medvedev expressed hope on Sunday that Russia and the United States would be able to sign a new nuclear arms reduction deal in December.

"We, indeed, devoted most of the time to discussing a treaty on the reduction of offensive armaments and recognized the need to provide additional impetus to these negotiations," Medvedev said after his talks with U.S. President Barack Obama at the summit of the Asia Pacific Economic Cooperation (APEC) member states in Singapore.

Medvedev said it was still necessary to find solutions to some issues that remained and involved technical aspects in some cases and political aspects in other cases.

"I believe that we'll be able, as we agreed during our first meeting in London and during our subsequent meetings, to agree on the final text of the treaty by December," Medvedev said, adding that the deal would be a contribution by Russia and the U.S. to international security.

The chief of the Russian General Staff said on Thursday that the ongoing arms cuts talks between Russia and the U.S. had seen differences on inspection and verification procedures.

"There are a number of problems pertaining to inspections, verification, and reporting figures," Army Gen. Nikolai Makarov said.

Makarov also said Washington was seeking to keep a point from the original treaty on the U.S. monitoring of Russia's mobile ground-based missiles.

He said monitoring had been provided by a U.S. team based in the Russian city of Votkinsk, home to a missile manufacturing plant.

"We do not have such missions in the United States, so it is quite natural that this [Votkinsk] mission will be removed, and it will leave its post on December 5," he said.

"We want the treaty to ensure both the security of the Russian Federation and of the United States on equal levels."