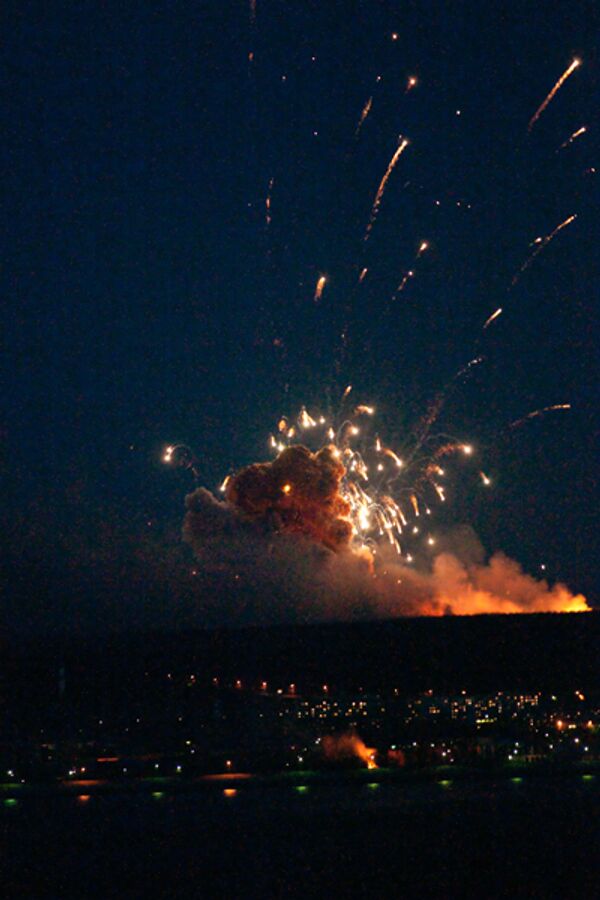 Subscribe
Two firefighters died and seven soldiers were injured during blasts at a Russian military depot in the city of Ulyanovsk in the Volga Region, the Defense Ministry said Friday.

MOSCOW, November 13 (RIA Novosti) - Two firefighters died and seven soldiers were injured during blasts at a Russian military depot in the city of Ulyanovsk in the Volga Region, the Defense Ministry said Friday.

Investigators said the firefighters who died were a sailor and a warrant officer.

The ammunitions depot belongs to the Russian Navy near the Caspian Sea.

A law enforcement source said two railroad cars of gunpowder also ignited during the fire, which was being extinguished by nearly 400 people.

Ulyanovsk governor Sergei Morozov's press service said 43 people were hiding in a bomb shelter and were taken out after the fire was partially localized. He also said there is no threat of chemical contamination as the depot did not contain munitions with chemical agents.

Earlier it was reported that 35 people were unaccounted for after the blasts, and Morozov earlier said the chances to find the 35 missing people alive were small. The 43 people taken out of the shelter are believed to include those previously considered missing.

Morozov said 11 people were hospitalized after the blasts with a "danger radius" around the depot being 7 km (4 miles), adding that over 3,000 people had been evacuated from the nearby areas after the explosions started at about 3:30 pm Moscow time (12:30 GMT) at the depot belonging to military enterprise 31st Arsenal.

He ruled out a terrorist attack, saying the fire will be fully extinguished by morning. Negligence and mishandling of weapons are the main reasons being investigated.

The Russian Federal Security Service reported earlier that the fire emerged during a controlled operation to destroy ammunition because "the set cycle was broken." The fire "entailed further blasts of ammunition," the service said.

Local railroad communication was suspended after the explosions but later resumed.