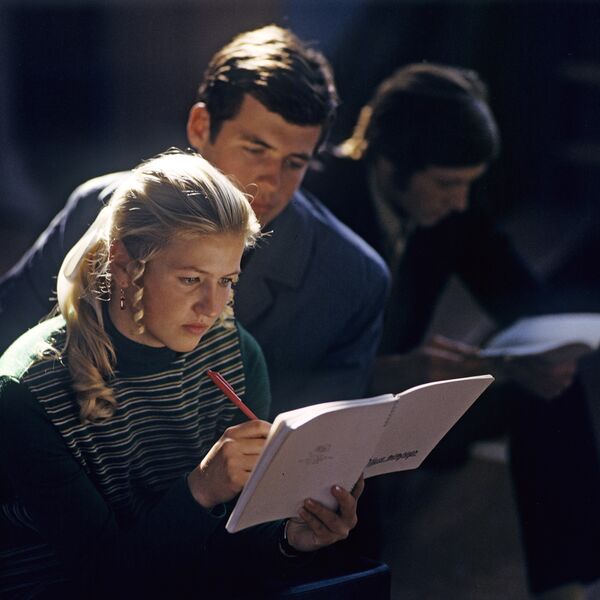 LONDON/ BIRMINGHAM/ MANCHESTER (Alexander Smotrov) - The global economic crisis hasn’t affected Russians’ wish and opportunities to study at British universities, famous for their traditions, quality and relative accessibility of education compared with other foreign educational institutions. .
“The financial crisis didn’t deal a serious blow to student recruitment and universities on the whole. For Russians, as far as I understand, it is not a big problem as well, as many who had saved money specifically for education still intend to spend it for studying”, representative of Royal Holloway International department Paul Woods told RIA Novosti.
According to Mr Woods, the period of recession is considered by some as a good time to get a new education or a further academic qualification that may help career progression in the future..
On the whole, the number of applications from foreign students has risen this year, in some countries by 20-30 per cent, according to Michael Gibbons, Head of International Department at the University of Manchester. “We don’t know yet why it happens – maybe, because of the crisis, maybe, someone wants to secure oneself and apply to several universities”, Gibbons said. The university does its best to process all applications in time without making bureaucratic barriers to those who really wishes to study in Manchester, he added.

In spite of conventional stereotypes, there are not too many Russians among all students of British universities. Many of them take active part in university life, successfully win grant contests and choose, to their view, the most prospective professions.
Now, about 30 per cent of 7,500 students of the Royal Holloway, which is a part of the University of London, are from overseas. There were 58 Russians enrolled this academic year. The most popular subjects among Russian students remain Management and Economics, although some students are now opting for less traditional subjects, such as Media Arts.
The University of Manchester, one of the biggest and most prestige educational institutions in the UK, has 34,500 students, about 7,000 of whom are foreigners from 162 world countries. Last academic year there were 49 Russians among them, with 34 graduated with bachelor degree, 12 got master’s degree and 3 engaged in research. The most popular option is Manchester Business School, chosen by a third of all Russian students. 10 students study social sciences.
The University of Birmingham, another institution taking rather high positions in educational ratings, has 26,000 students including 4,000 students from 150 countries all over the world. There are 53 Russian students, both British and EU residents and as well as those who came directly from Russia. The most popular subjects among students receiving bachelor’s degree are foreign relations, international business and languages. Master’s degree students deal with scientific and computing research as well as study business administration.

DREAMS ABOUT FUTURE
Russian students can be met at the most diverse programs offered by British universities from art, design, fashion, communication and performing arts at University of the Arts London to those developing their professional skills at MBA programs at the University of Manchester.
Nikita came to Aston University in Birmingham from Moscow where he studied for a time at the Higher School of Economics. “I would not be able to come here for an undergraduate programme unless I studied in Anglo-Russian school in Moscow, which gave me an opportunity to take A-levels in Russia and where my desire to study in Aston was formed”, he states. A teenager from an ordinary family having two sisters and a younger brother besides him, Nikita has at once approved himself in studying, social activities and elective courses, a necessary part of British universities’ life. He is a member of the university water polo team and takes part in international competitions. He also graduated from a musical school and plays the saxophone in the University Orchestra.
“I would like to return to Russia, but with some work experience gained here at Aston University during a placement year as part of my degree, because there are no such program in Russia”, Nikita comments on his future plans.
Kristina is a Management student at Royal Holloway, University of London. Having previously attended a school in South East of the country, she has been living in the UK for the past seven years. “I came to study in the UK at a very young age and consequently had to learn how to be independent. I think Surrey is a great place to live. It is peaceful, quite and beautiful, yet only 40 minutes away from central London.” Proudly speaking about the university, this young lady willingly answers questions about her studies.
Talking about Russia and future plans, Kristina says, “At times I miss my friends and family, which makes me want to move back to St-Petersburg. However, I think I will follow my sister’s footsteps and join the UK finical sector after completing my degree. I believe that starting my professional career the UK will give me the best prospects in my future undertakings, weather I decide to stay in the UK, work in the EU or move back to Russia.”
For a 23-year Vladikavkaz resident Yury the Brunel University master’s program in design and management became logical development of his education in Milan where he studied industrial design. Yury used to work at a prestige designer company in Moscow. Now he dreams about his own projects and already has certain ideas and developments in website design. By half, Yury’s studying is paid by his parents. The second half he pays with self-earned money.
“If my project is a success, I’ll move to London, it is more cheerful and there are more opportunities there. I promise, you’ll hear about me”, he says with a smile.