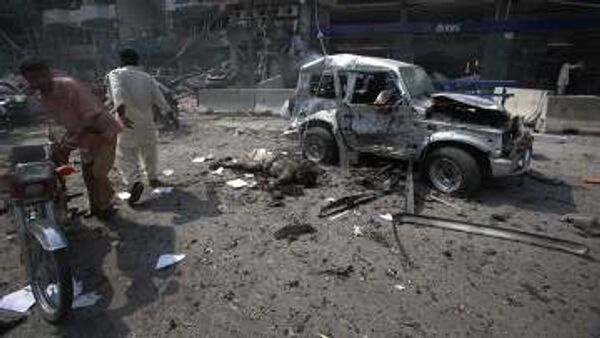 The death toll from a suicide bomb attack in Pakistan's north-western city of Peshawar on Friday has risen to 10, with over 30 injured, national media reported.

MOSCOW, November 13 (RIA Novosti) - The death toll from a suicide bomb attack in Pakistan's north-western city of Peshawar on Friday has risen to 10, with over 30 injured, national media reported.

The explosion occurred at around 06:30 local time (01:30 GMT). Much of the three-story building belonging to Pakistan's national intelligence agency was destroyed.

The head of Peshawar's local government Sahib Zada Anis was quoted as saying most of the victims were civilians.

Reuters said the attack was carried out by a suicide car-bomber.

The attack, believed to have been carried out by militants in retaliation for anti-terrorist operations on the Afghan border, is the fourth to hit northwest Pakistan in a week.

At least 30 people were killed and more than 40 others injured on Tuesday in a car bomb explosion in the northwest Pakistani city of Charsadda.

A suicide bomb attack on the outskirts of Peshawar on Sunday claimed at least 11 lives, with 36 people wounded. On Monday, a terrorist in a rickshaw blew himself up near a group of police officers in the city, killing three.

The area separating Pakistan and Afghanistan has been a stronghold for Taliban radicals who fled Afghanistan after the U.S.-led invasion toppled the Taliban regime there in 2001.