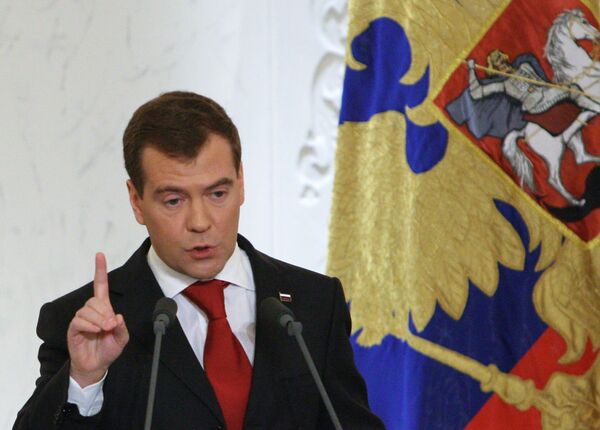 "The programs of developing nuclear power engineering have been separated as a special area in the modernization project, with next-generation nuclear reactors and nuclear fuel enjoying a demand within the country and abroad and will appear in Russia by 2014,"Medvedev said in his state-of-the-nation address to both houses of parliament.

Medvedev said nuclear developments would also be actively applied in other spheres, first of all, in medicine, adding that Russia would also participate in an international project of thermonuclear synthesis as these technologies held promise for the future.

Medvedev said Russia, as a member of the world's club of nuclear technology developers, would team up with foreign partners to open access to a virtually unlimited source of energy.

Russia has repeatedly announced its new nuclear developments and plans to introduce them within the country and promote them on global markets.

Russian nuclear power corporation TVEL, which accounts for about 17% of the world's nuclear fuel market, is developing a new type of nuclear fuel, TVS-Kvadrat, to be used for western-designed nuclear reactors.

Russia is also making a large contribution to the project of an experimental thermonuclear reactor in France, which is expected to conduct its first plasma operation in 2016.

The $10-billion project involving Russia, South Korea, China, Japan, India, the European Union, and the United States to build a reactor in Cadarache near Marseilles is designed to demonstrate the scientific and technological potential of nuclear fusion, amid concerns over growing energy demand and the impact on the global climate of burning conventional fossil fuels.