Russian police must not aim guns at law-abiding citizens - minister 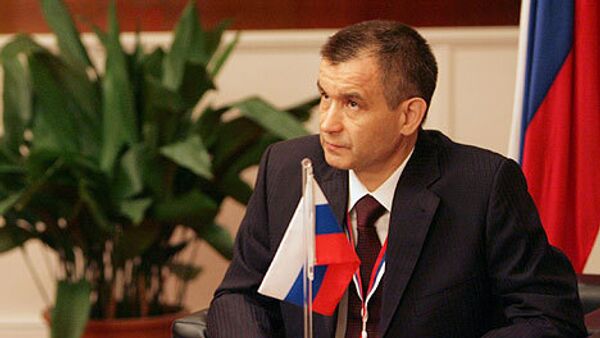 © RIA Novosti
Subscribe
International
India
Africa
The Russian interior minister used his annual Police Day address on Tuesday to remind police chiefs that officers should point their weapons at criminals, and not aim them at law-abiding citizens.

MOSCOW, November 10 (RIA Novosti) - The Russian interior minister used his annual Police Day address on Tuesday to remind police chiefs that officers should point their weapons at criminals, and not aim them at law-abiding citizens.

There have been a number of murder cases in 2009 involving Russian police officers. The most high-profile case saw a southern Moscow district chief kill three people and injure two during a supermarket shooting spree in April.

"This year was particularly difficult and hard for all Russian police," Rashid Nurgaliyev began. "We must remember the tragedy that happened in Moscow, unfortunately through the fault of one of our colleagues, every day," he said.

"Department chiefs who take people on and hand out IDs and weapons must understand that these weapons should be pointed only in the direction of criminals, and not aimed at peaceful citizens," he added.

As well as violence, the Russian police force has been plagued by increasing allegations of corruption, something Nurgaliyev also pledged to tackle.

"We will not cover up for anyone!" he said. "This also refers to those who have turned service in law enforcement agencies into a criminal business. Such people must have no place in our ranks!"

This month, a police officer from the southern Russian city of Novorossiisk was fired and is set to be charged with libel after posting a video on the web asking Prime Minister Vladimir Putin to launch a nationwide corruption probe.

Alexei Dymovsky's message said that department chiefs routinely jailed innocent people to improve statistics. He also said that many young people joined the force despite monthly wages of some $400 because they knew they would be able to supplement their income with bribes.

The officer also complained of "dumb bosses" and routine "ignorance, boorishness and recklessness" within the force, as well as complaining that police were forced to work unpaid overtime.

The Novorossiisk police department has denied the allegations, saying "not a single allegation" could be verified.

President Medvedev has highlighted corruption as one of the country's key problems. Shortly after taking office in May 2008, he signed a decree to set up a presidential anti-corruption council and approved a plan to deal with the problem in July 2008, proposing that special units be created in every branch of government.