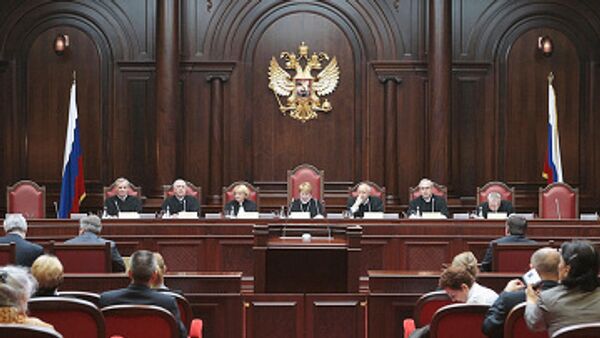 MOSCOW, November 9 (RIA Novosti) - Russia's Constitutional Court held hearings Monday on whether the death penalty should be restored after a court-imposed moratorium expires on January 1.

The issue has sparked debate among politicians and experts, as surveys have shown strong public support for the resumption of executions.

After several hours of hearings, court chairman Valery Zorkin said the decision would be made in a closed session. He did not give a date, but a court spokesperson later said the decision may come before the New Year.

Officials and experts addressing the hearings spoke against the resumption of executions, but some said abolishing the death penalty could take time.

Justice Ministry spokeswoman Yelena Borisenko said the moratorium could not be lifted until Russia decides whether to ratify an international treaty abolishing the death penalty.

A senior member of the Federation Council, the upper house of parliament, said "the death penalty could be abolished in Russia eventually, as ethnic peculiarities need to be taken into account," and the process should be gradual and flexible.

Yelena Vinogradova said, however, that "the state that kills criminals - its citizens - should not expect an improvement in the moral climate of the country."

A Constitutional Court ruling in 1999 declared that the death penalty could not be applied until trial by jury had been introduced in all Russian regions.

The troubled North Caucasus republic of Chechnya will become Russia's last region where juries will be allowed as an alternative to panels of judges on January 1, 2010, removing the formal obstacle to reinstating the death penalty by shooting.

The Constitutional Court must now decide if by reinstating the death penalty Russia would be violating its international commitments, and if that would be unconstitutional.

Russia undertook to scrap the death penalty when it signed Protocol 6 to the European Convention on Human Rights, but it has not yet ratified the document.

A former justice minister and now a senior member of the lower house of parliament said low public support for abolishing the death penalty was explained by high criminality and people's dissatisfaction with police performance.

Pavel Krasheninnikov said the death penalty must be abolished immediately with amendments to the law. However, public support for capital punishment makes it difficult for lawmakers to abolish the practice.

Communist lawmaker Vadim Solovyov said abolishing the death penalty could "contribute to the growth of criminality in Russia."