20 years after the fall of the Berlin Wall: Lessons and warnings 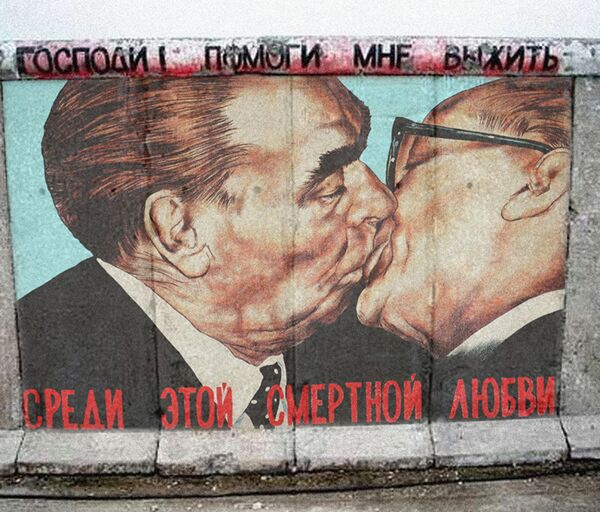 MOSCOW. (RIA Novosti commentator Dmitry Babich) - The border between East Germany and West Germany was opened 20 years ago, on November 9, 1989. Germany's reunification became inevitable that day, although Germany now celebrates it on October 3, the day when the two states reunited in 1990.

MOSCOW. (RIA Novosti commentator Dmitry Babich) - The border between East Germany and West Germany was opened 20 years ago, on November 9, 1989. Germany's reunification became inevitable that day, although Germany now celebrates it on October 3, the day when the two states reunited in 1990.

The majority of the world's media today present that event simplistically. They write that East Germans, who could no longer tolerate the Soviet occupation, embraced their rich western brothers, which made the free West happy. Subsequently, reunited Germany was invited into NATO to protect it from the potential encroachments by the unreformed "Russian bear."

They say little, if anything, about the role of Mikhail Gorbachev and Russian democrats.

Was it a clear victory of the Western civilization over the Eastern barbarians?

The situation was much more complicated. The reunification of Germany in 1989-1990 would have been impossible without the good will of the Soviet Union's leadership and the people who could influence the country's policy through the first freely elected Congress of People's Deputies in 1989.

In the early autumn of 1989, the leaders of West Germany and East Germany could not imagine that their countries would reunite so quickly. Even the East German government's decision of November 9, 1989 to allow Germans to travel to West Germany and West Berlin without special passes was effective only "until the adoption of a new law on foreign travel," which was never adopted.

In September 1989, the East German authorities expressed their disappointment to the government of Hungary through which East Germans were then escaping to Austria and on to other Western countries. The East German leaders even complained to Gorbachev, who never responded.

So, it was Moscow who initiated democratic change in Germany in 1989, including the reunification of the two German states. Moscow's role was at least as big as that of Western Europe and the United States. It was not the East German authorities who allegedly wanted change but feared Russia's reaction, but Russia, where Gorbachev had launched perestroika, that encouraged East Germans to start democratic reforms.

In short, it would be wrong and unfair to present the history of Russian-East German relations as a period of Soviet occupation and unbearable pressure.

"It became clear to me during the celebration of East Germany's 40th anniversary in October 1989 that German socialism was doomed," Mikhail Gorbachev said at a recent roundtable, titled, "1989-2009: Europe at the crossroads."

"Erich Honecker missed the time when a reform was still possible without breaking the system," Gorbachev said. "However, many people in the West feared German reunification. French President Francois Mitterrand came to Moscow to discuss this issue several times. [British Prime Minister Margaret] Thatcher was openly against the reunification, which she thought would threaten the principle of the inviolability of the post-war borders in Europe sealed in the Helsinki Agreement."

Initially, many Western countries did not want the two German states to reunite or were wary of the possibility. For example, the United States approved the idea only when it had become clear that its allies would rule the united Germany.

Central European countries, above all Poland and Czechoslovakia, actually feared the reunification of Germany because they still remembered what the Nazi Germany did to them, and also because they had seized parts of Germany following its defeat in WWII in 1945.

American historian Mark Kramer wrote in The Washington Quarterly in April 2009: "In Poland, Prime Minister Tadeusz Mazowiecki and other leading political figures across the spectrum were so alarmed about the prospect of a reunified Germany that they publicly called for the Warsaw Pact to be bolstered and for Soviet troops to remain indefinitely on Polish (and East German) soil until the status of Germany and of the German-Polish border could be resolved."

In late 1989, the leaders of the new East European regimes did not consider withdrawing from the Warsaw Pact or joining NATO. The West European and American leaders' conservatism was also buttressed by uncertainty as regards the East Germans' choice. Many Western newspapers wrote that East Germans, who for 40 years lived amidst anti-capitalist propaganda, would again vote for the Communists or their reformed successor, the Party of Democratic Socialism.

The situation changed overnight on March 18, 1990, when the Alliance for Germany, an opposition coalition, won the parliamentary elections. It consisted of the Christian Democratic Union, Democratic Awakening and the German Social Union, all of which demanded immediate reunification with West Germany, and was supported by West German Chancellor Helmut Kohl.

However, the coalition won only 48% of the vote, which is not an absolute majority. Social Democrats, who were still wary of reunification, won 21.8%, and the Party of Democratic Socialism 16.3%.

But Kohl and U.S. "hawks" were unconcerned about those "insignificant" details. They had the majority in the East German parliament and could disregard the opinion of the minority. Their policies were determined that day - they would work to accelerate German reunification and integrate the new state into NATO.

Moscow tried to protest against Germany joining NATO, but its partners in the U.S. and the European Economic Community, the forerunner of the more powerful and inertia-driven European Union, refused to listen to its arguments. It was at that time that the U.S. and its European allies found a hypocritical formula for appeasing Russia.

The NATO expansion will actually expand the zone of peace and security, they said, and the closer that zone approaches Russia the better for it. Nobody thought then that the "peace and security zone" would bomb Serbia, Belgrade and Podgorica in the former Yugoslavia.

During the roundtable in the Gorbachev Foundation, Mikhail Gorbachev, the Soviet Union's first and last president said: "We asked our American partners why they feared Germany and why they wanted it to join NATO. They replied that Germany outside NATO could be expected to do anything. We hoped that Germany could become a member of the common European security structures, which were stipulated in the Charter for European Security adopted in Paris in 1990. But the Western countries forgot about that Charter as soon as the Soviet Union disintegrated. They said they made their promises to a different country."

So, the actual situation differs dramatically from the benevolent statements currently made in Washington and Berlin. It can be said that German reunification was a forced and undemocratic decision that could be expected from Bolsheviks rather than Western democracies.

The winner is always right, one could say, and Chancellor Kohl got what he wanted, and who cares how he did it. But cultural and economic losses from such decisions often become apparent only years or even decades later.

This is probably why debates about that event have not stopped in Germany 20 years later, and old wounds refuse to heal at the intellectual and economic levels.

In the mid-1990s, the Spiegel magazine asked East Germans what was better and what was worse in their former country compared to reunited Germany. The answers provided by the Ossis, as West Germans call East Germans, shocked many. East Germany won on all counts, including personal security, healthcare and education, and excluding only living standards.

This could be the "material" foundation for the current popularity of the democratic socialist Left Party, the successor of the Party of Democratic Socialism, which has won a considerable share of the Social Democratic electorate.

There is also an intellectual reason for the Left Party's popularity. In the 1990s, the West painted black not only East Germany and its history but also Germany's radical social tradition.

Christa Wolf, the most interesting and mysterious East German writer, contributed one of the deepest and merciless stories about Nazi Germany in 1976, "Patterns of Childhood." But she was victimized in the 1990s because she was a member of East Germany's Socialist United Party. Nobody listened to her explanation that she joined the party to be able to popularize anti-fascist leftwing ideas.

The current Berlin politicians may not like it, but the history of East Germany is part of the German identity, and attempts to bury it as undemocratic and unwanted can only undermine the idea of democracy.

According to the Washington-based nonpartisan fact tank Pew Research, the number of Germans who support the idea of transition to democracy dropped from 91% in 1991 to 85% in 2009.

The situation in Ukraine is much worse, as the share of Ukrainians who support multiparty democracy has plummeted from 72% in 1991 to 30% in 2009.

The reason for this public disappointment could be not democracy as such, but its specific interpretations by some politicians. In Germany, the victory of Kohl's Alliance for Germany was proclaimed as the final choice of the German people in 1990. In Ukraine in 2005, the questionable victory of one man, Viktor Yushchenko, was celebrated as the Ukrainians' final choice of NATO, the EU and so on.

No nation likes this kind of "unconditional" democracy.