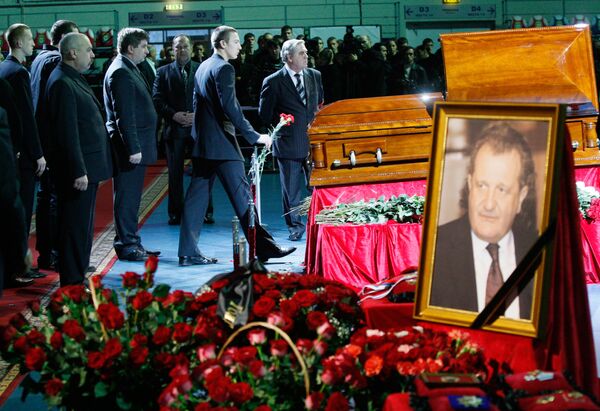 The funeral, attended by hundreds of people, was held at a cemetery in the central Israeli city of Petah Tikva.

Unidentified assailants armed with a 9mm automatic and a pump-action shotgun opened fire on Kalmanovich, 59, the owner of the Russian women's basketball club Spartak-Vidnoye, as he sat in his black Mercedes S500 on Moscow's Krasnopresnenskaya Embankment on Monday. He died instantly.

His driver, who initially tried to give chase, was forced to pull over outside the capital's 16th century Novodevichy Convent due to serious injuries.

Investigators have said the attack bears all the hallmarks of a contract killing. They have also not ruled out that the murder was linked to Kalmanovich's business activities.

Reports also suggested he was friends with the late notorious crime boss Vyacheslav Ivankov, nicknamed Yaponchik. Ivankov was gunned down in late July after leaving a restaurant in northern Moscow. He died of his injuries in early October.

Born in 1949 in Soviet Lithuania, Kalmanovich left the U.S.S.R. with his family for Israel in 1972, where he graduated from Jerusalem University. In 1988, he was sentenced to nine years in jail for spying for the Soviet Union, but released in 1993. He then left Israel and returned to Moscow, quickly finding his way in the chaotic dawn of post-Soviet capitalism.