Russia to use military force abroad only as last resort - Medvedev 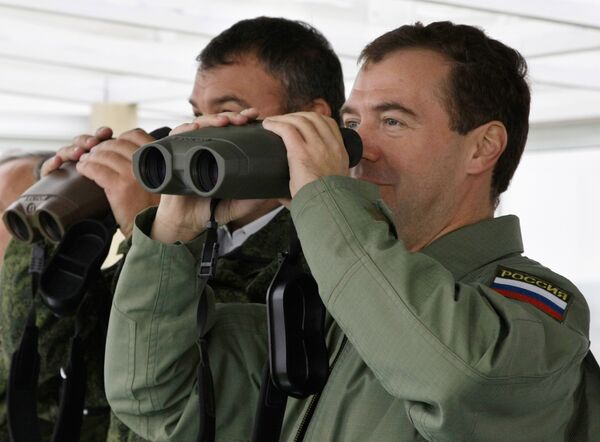 Russia will use its Armed Forces outside the country only in extreme circumstances to protect Russian nationals, President Dmitry Medvedev said on Thursday.

MOSCOW, November 5 (RIA Novosti) - Russia will use its Armed Forces outside the country only in extreme circumstances to protect Russian nationals, President Dmitry Medvedev said on Thursday.

"Such decisions will be made only when absolutely necessary," Medvedev said at a meeting with members of the upper house of Russia's parliament.

"Our citizens must be protected in any part of the world, and they must feel protected by the state."

He stressed that such decisions "must be set in law."

The house will review on Friday amendments to a law on defense which expands the use of the Russian Armed Forces abroad in certain situations.

Medvedev submitted the amendments to parliament in August, just after the first anniversary of Russia's five-day war with Georgia. The lower house of the Russian Parliament, the State Duma, passed the bill on October 23.

The amendments stipulate that Russian troops can be used abroad to repel an attack on Russian troops deployed outside the country, repel or prevent an armed attack on another state asking Russia for military assistance, defend Russian nationals abroad from an armed attack, fight sea piracy and ensure the safety of commercial shipping.

Russia's current 2006 legislation only allows the president to send troops to fight terrorism on foreign soil. Experts have said the law lacks clearly defined terms of "wartime" and a "combat situation," which complicates the deployment of troops outside the country.

Under the new document, the Russian president can decide to deploy armed forces abroad subject to approval by the upper house.