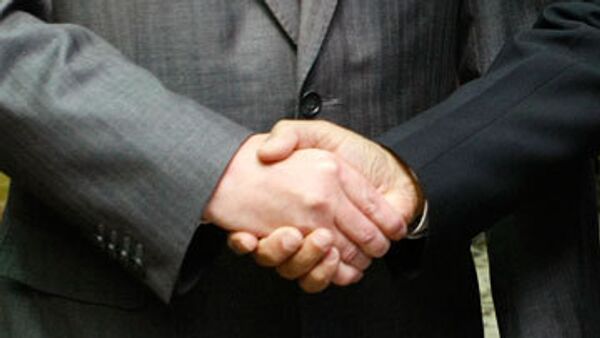 © RIA Novosti . Alexey Nikolskiy
Subscribe
Foreign Minister of Bosnia and Herzegovina Sven Alkalaj said the country is ready to cooperate with Russia in all spheres and called for Moscow to develop economic ties with Sarajevo.

SARAJEVO, November 5 (RIA November) - Foreign Minister of Bosnia and Herzegovina Sven Alkalaj said the country is ready to cooperate with Russia in all spheres and called for Moscow to develop economic ties with Sarajevo.

"Russia and Bosnia-Herzegovina have good and stable relations," Sven Alkalaj told RIA Novosti ahead of an official visit of Russian Foreign Minister Sergei Lavrov to Sarajevo, scheduled for Thursday.

"However, the existing [bilateral] relations are short of intensive high-level contacts in the economic sphere," Alkalaj added.

Russian Foreign Ministry spokesman Andrei Nesterenko earlier said Sergei Lavrov was to discuss with his Bosnian counterpart and other top country officials the Bosnian settlement and bilateral relations between Russia and the Balkan state during his stay in Sarajevo.

The Bosnian foreign minister said he expected to discuss with Lavrov a range of "issues of the development of political relations with the focus on the strengthening of economic cooperation," adding "despite a large number of agreements being signed, economic cooperation [between the states] has not yet reached a satisfactory level."

Sven Alkalaj said seven agreements in different spheres have been so far signed by the two countries, and seven other are being prepared.

He said an agreement on air transportation communication between Russia and Bosnia-Herzegovina was expected to be signed on November 20 in Moscow, during the First Global Ministerial Conference on Road Safety, adding Bosnian Transport and Communications Minister Rudo Vidovic was to represent the country at the meeting.

Russia is one of the guarantors of the Dayton Peace Agreement, signed in 1995, after the end of the Bosnian civil war, which followed the break-up of Yugoslavia and claimed over 100,000 lives.