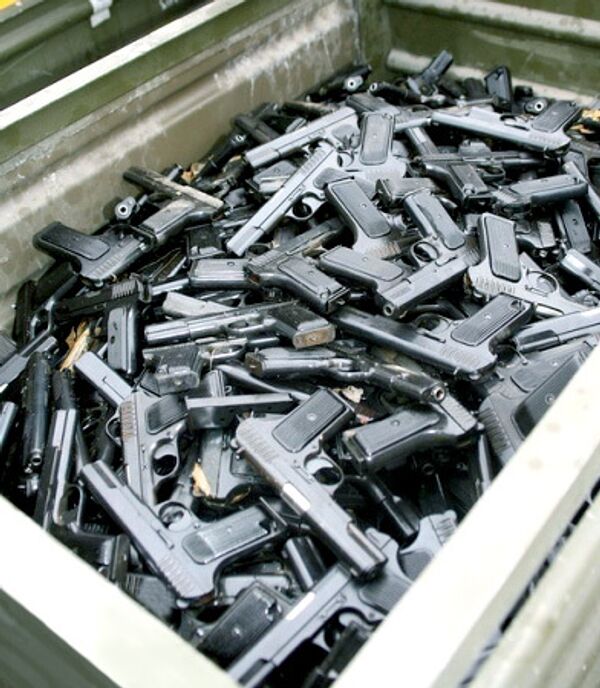 Subscribe
Israeli Defense Forces have said a vessel intercepted on Wednesday by the country's naval commandos was carrying a huge shipment of arms from Iran to Lebanese Hezbollah militia.

TEL AVIV, November 5 (RIA Novosti) - Israeli Defense Forces have said a vessel intercepted on Wednesday by the country's naval commandos was carrying a huge shipment of arms from Iran to Lebanese Hezbollah militia.

The Cyprus-owned and Antigua-flagged ship, the Francop, had been intercepted about 180 km (100 nautical miles) from Cyprus during a routine patrol by the navy on Tuesday evening and was towed to the Israeli port of Ashdod.

"Dozens of containers containing large amounts of weapons and ammunition disguised as a civil cargo were discovered on board [the ship] among hundreds of [other] containers," the Israel Defense Forces press service said in a statement.

Israeli defense officials said the shipment was "unusually large", adding missiles and rockets were among the weapons discovered on board the ship.

"Iran was the weapons' country of origin. The weapons were intended for the Hezbollah terrorist organization," the statement said.

CBC News quoted Israeli Defense Minister Ehud Barak as saying the interception of the Francop was "another success against the relentless attempts to smuggle weapons to bolster terrorist elements threatening Israel's security."

The country's Prime Minister, Benjamin Netanyahu, was quoted by the news network as saying the arms supply "was intended to hit Israeli cities."

The Israeli authorities accused Iran of violating international law, including several resolutions of the UN Security Council, which stipulate restrictions on export of weapons to Lebanese paramilitary groups.

Tehran has so far not commented on the claim.

Cyprus government spokesman Stefanos Stefanou said the country is not linked to the intercepted vessel.

The reported interception was the second major arms seizure Israel has claimed. In January 2002, Israeli naval forces said they stormed a freighter on the Red Sea and confiscated dozens of tons of weapons, intended for Palestinian militants in the Gaza Strip.