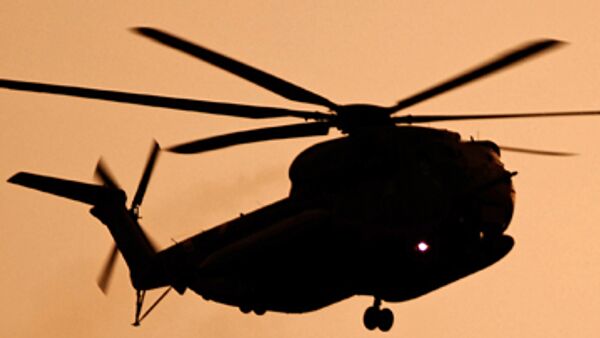 Russia is ready to provide NATO with helicopters for its war in Afghanistan - on commercial terms.

MOSCOW. (RIA Novosti military commentator Ilya Kramnik) - Russia is ready to provide NATO with helicopters for its war in Afghanistan - on commercial terms.

Dmitry Shugayev, general director of the state-owned corporation Russian Technology, made this announcement last week at a meeting in Brussels with officials in charge of logistics for NATO forces.

During its operations in Afghanistan, the alliance has faced an acute shortage of helicopters. In Afghanistan's extremely harsh conditions, helicopters often break down and need replacements even in non-combat situations. And the need for military hardware grows with continued increases in troops.

Soviet or Russian manufactured aircraft play a significant role in supplying NATO forces. Today Russian hardware is used both by commercial airlines working for the military and directly by the militaries of some NATO member states, generally Eastern European countries. At present, Eastern European countries have at their disposal around 400 Russian-made transport helicopters, most of which are slated for use in Afghanistan or are already deployed there.

Such widespread use could hardly go unnoticed by the Russian manufacturers of the aircraft, who at the very least intend to get their share of the orders for equipment repairs. And finally, taking into account the Russian helicopters' ease of use, lower cost, and higher reliability in the harsh conditions of Afghanistan as compared to their Western equivalents, Russia can count on orders from countries involved in Afghanistan and airlines serving the forces deployed there. Apart from direct orders for helicopters, it is possible that Russia could also train pilots and technical experts at Russian training centers.

Which models do Western militaries use? Primarily transport helicopters from the Mi-8/17 series, which are used extensively by many countries, along with their "heavier" counterparts - Mi-26s. The Soviet Union used all of these aircraft in its own Afghan war, but even today they meet all of the requirements for military transport helicopters, and are on a par with the best helicopters in the West. The fact that they are extensively used to transport NATO command personnel, not only in the Afghanistan conflict zone but in other wars, speaks to the reputation of Russian helicopters. For example, in 1991 a Syrian Mi-8 served as the "personal transport" for General Norman Schwarzkopf, commander of the Coalition Forces in the Gulf War.

How beneficial is this situation for Russia, and is it really worth it to be involved in the Afghan war, even in such an indirect way?

Here we must return to the history for a moment, and remember that Russia has never really been in a position to benefit from any wars. In most cases, either Russia itself was involved in the war, and thus paid for it in blood and weapons, or it bore considerable material expenses to support one side or another against an enemy it could not fight directly, for political, economic, geographic or other reasons.

A unique situation has now emerged in Afghanistan. NATO is waging a difficult and increasingly senseless war there. However, if there were no coalition forces there, it is quite possible that Russia would have had to wage this war itself - at the very least in order to prevent a sharp destabilization of the neighboring Central Asian republics if the Taliban were to achieve total victory in Afghanistan. In addition, the war would probably be fought within Tajikistan, or perhaps even closer to the Russian border than the Soviet-Afghan war, for example, in the Fergana Valley of Uzbekistan.

For the time being, Russia can remain outside of this war, limiting itself to providing transit services, and perhaps even make a profit - for example, by selling helicopters.

At the same time, it is obvious that Russia should refrain from direct involvement in the conflict by, for example, sending helicopter units of the Russian air force to Afghanistan. The Afghan people do not support the NATO operation and most of them are against the alliance's forces, which can explain the Taliban's advances in recent months.

If NATO is unable find a solution to the current situation that is acceptable to most of the country's population in the foreseeable future, then the alliance will be forced to leave Afghanistan in the coming three to four years. Although the consequences of such a withdraw are unknown, it is most likely that the Taliban or another decidedly anti-western power will come to power. And in this case, it would be much easier for Russia, as a country that did not participate in the war, to negotiate with the new leaders of Afghanistan than it would be for the recently expelled occupiers.