Number of swine flu deaths in Russia rises to 10 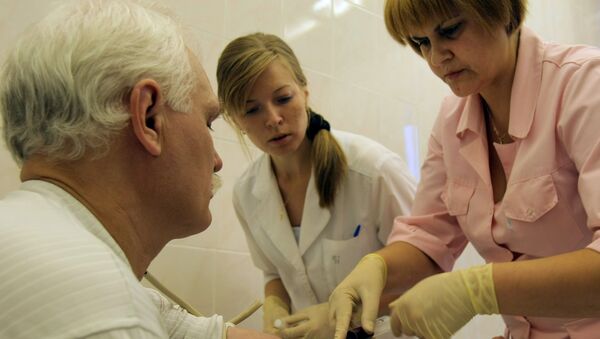 © RIA Novosti . Danilichev Alexey
/
Go to the photo bank
Subscribe
The death toll of the swine flu pandemic in Russia has risen to at least 10, the country's consumer rights watchdog said on its website on Tuesday.

MOSCOW, November 3 (RIA Novosti) - The death toll of the swine flu pandemic in Russia has risen to at least 10, the country's consumer rights watchdog said on its website on Tuesday.

"Russia has so far registered 10 deaths from the pandemic H1N1 virus, complicated by pneumonia, among people aged 20-53, including eight in the Trans-Baikal Territory, one in Moscow and another one - in the Krasnoyarsk Territory," Rospotrebnadzor said.

According to the agency, all of the sick patients were late to report their illnesses as they sought medical attention 3-5 days after feeling the first symptoms of the disease, when the swine flu virus had already led to complications in the form of pneumonia and toxic shock.

The most threatening situation with swine flu has been monitored in Russia's Far East, Siberia and Moscow, Rospotrebnadzor said.

Russian Health Minister Tatyana Golikova earlier said the country planned to start a swine flu vaccination program on November 9, primarily in the regions that were severely hit by the H1N1 virus outbreak.

According to the World Health Organization, more than 5,700 people have died from swine flu worldwide, and the total number of officially confirmed cases has exceeded 440,000, as of October 25.