Soil moisture and ocean salinity to be measured from space 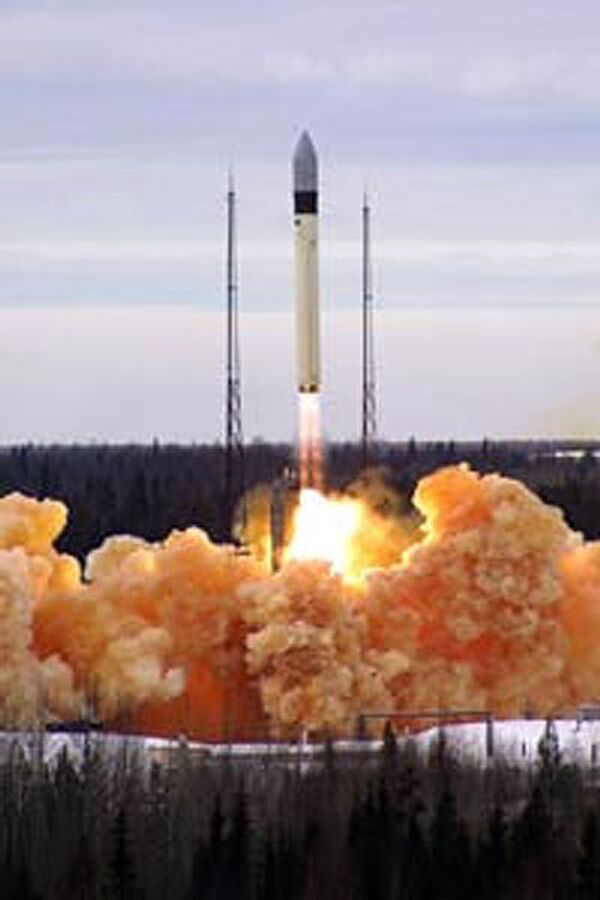 © Khrunichev
Subscribe
Early in the morning of November 2, a Rokot carrier rocket, which is a derivative of the SS-18 ICBM (NATO reporting name SS-19 mod.2 Stiletto), was launched into orbit from Russia's Plesetsk Space Center. It carried two European Space Agency (ESA) satellites: the SMOS (Soil Moisture and Ocean Salinity) and PROBA-2 (PRoject for OnBoard Autonomy).

MOSCOW. (RIA Novosti commentator Alexander Peslyak) - Early in the morning of November 2, a Rokot carrier rocket, which is a derivative of the SS-18 ICBM (NATO reporting name SS-19 mod.2 Stiletto), was launched into orbit from Russia's Plesetsk Space Center. It carried two European Space Agency (ESA) satellites: the SMOS (Soil Moisture and Ocean Salinity) and PROBA-2 (PRoject for OnBoard Autonomy).

As ESA representative in Moscow Rene Pischel told RIA Novosti during an interview, the simultaneous launch of these two satellites marks a new chapter in the history of studying the Earth from space and the ESA's Living Planet Programme.

According to his colleague Volker Liebig, the SMOS satellite is the most important spacecraft in the Earth Explorer series and will be used for research into two aspects of Earth's complex climate system. Over the next three years, it will record soil moisture and the salinity at various locations in the world's oceans.

The data obtained from this line of research will allow scientists to create the first continuously updated, high-precision map of the salinity of the world's oceans and enrich their knowledge of the principles of oceanic flows and their influence on climate systems. Exact data on the Earth's hydrologic cycle will help scientists understand phenomena causing climate change, as well as predict extreme weather conditions and the sources of storms and hurricanes.

"We are very interested in monitoring the North Atlantic: it is there that we have the highest average water temperature, salinity and density," says Vladimir Sokolov, a department head at the State Oceanographic Institute. "It is the 'birthplace of weather' for the entire Eurasian continent. Although the North Atlantic receives a large portion of the entire fresh water influx, including fresh water from rivers, it maintains the highest salinity in the World Ocean because of a high evaporation rate." The evaporation transforms into energy producing an average thermal anomaly of up to 10 degrees, which affects Europe as well.

The scientist says the SMOS will help test the theory of antiphase temperature oscillations in the land-ocean cycles, and thus allow us to see more clearly what is in store for us in the near future. It will also shed light onto the question of whether Western Europe will turn into Magadan, a city in north-eastern Russia, if heat transfer from south to north is disrupted.

In total 10 European countries and Canada contributed to the satellite program. The PROBA-2 is the smallest of the ESA's spacecraft, and is shaped like a cube with one side measuring a little more than 0.5 meter and a weight of 130 kg. The agency says cheaper satellites could allow smaller companies to gain experience in satellite construction, which is vital for European companies to be competitive.

The Mission Control Center outside Moscow, along with stations in Norway, Spain, France and Sweden, will control the satellites and oversee the collection of data.

Russian engineers took the satellites' specifics into account when planning the launch. Firstly, the Rokot is the only Russian space launch vehicle (SLA) whose nose cone can be installed when the rocket is already in a vertical position at the launch pad. Secondly, according to Andrei Novikov from the Khrunichev Space Center, the satellites are attached to the SLA via an adapter system that is similar to a "kind of a Matryoshka nested doll that serves both as a fastener and a protective cover."

The nose cone is fitted atop the Briz-KM upper stage, thus allowing a design formerly used for ICBMs to be adopted to that of a carrier rocket. Equipped with a set of instruments and control systems, the Briz launches satellites into their prospective orbits. According to ESA specifications, the heavier SMOS will be launched into a 760 km-high orbit first, and then the Briz will carry the trial PROBA-2 down to a lower orbit altitude, releasing it at an altitude of 725 km to prevent a collision between the two spacecraft.