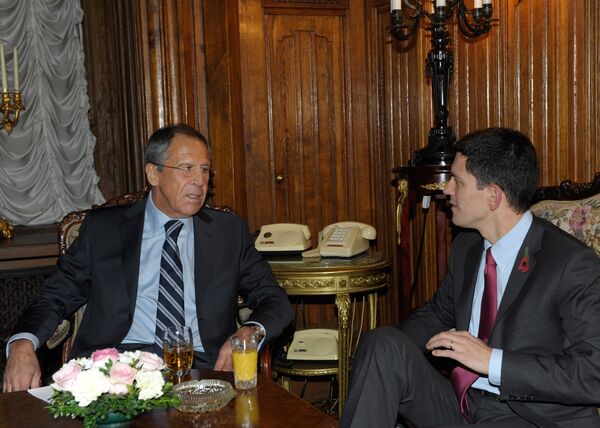 © RIA Novosti . Eduard Pesov
/
Go to the photo bank
Subscribe
MOSCOW. (RIA Novosti political commentator Andrei Fedyashin) - An attempt to add a bit more warmth to the relations between Russia and Britain during the visit of British Foreign Secretary David Miliband to Moscow and his talks with Sergei Lavrov on November 2 seems to have gotten off on the wrong foot. From all appearances, Russian-British relations will remain in limbo until next summer.

MOSCOW. (RIA Novosti political commentator Andrei Fedyashin) - An attempt to add a bit more warmth to the relations between Russia and Britain during the visit of British Foreign Secretary David Miliband to Moscow and his talks with Sergei Lavrov on November 2 seems to have gotten off on the wrong foot. From all appearances, Russian-British relations will remain in limbo until next summer.

This summer, Britain will hold parliamentary elections, which the Conservatives are likely to win, and Moscow will then have to build new relations with the British Cabinet. Strange as it might seem, the diplomatic tango between Moscow and London does not necessarily become more complicated or awkward when the Conservatives come to power. One can hardly conceive of anybody more conservative than Margaret Thatcher, but she was the first western leader with whom Mikhail Gorbachev started building new relations with the West.

The current situation is paradoxical in that Vladimir Putin, as president, and now President Dmitry Medvedev have developed sincere and business-like relations with most of Europe's main governments with the exception of Britain. These governments can be labeled: conservative (French President Nicolas Sarkozy), right (Italian Prime Minister Silvio Berlusconi) or center-right (German Chancellor Angela Merkel).

Moscow is least successful in developing relations with the U.K.'s (socialist) Labor Party. During the past five years relations between Moscow and London have been characterized by diplomat and spy extradition, government and semi-government office closure, court hearings, sanctioned officials (including visa denials) and a number of fallen oligarchs choosing London as a place of residence. It should be noted that France, Switzerland and Spain have their share of expatriated Russian oligarchs, but they seem to behave differently in these countries, being somehow less overt. This is difficult to explain; maybe the environment differs from that of the British Isles.

Mr. Miliband is the first British foreign office chief to come to Moscow in five years. The last time was Jack Straw's visit in July 2004. It's hard to contemplate a worse "reagent" for a Russian-British thaw than Mr. Miliband.

Ironically he arrived in Moscow on November 1, the day when former KGB agent Alexander Litvinenko was ostensibly poisoned with polonium-210 in London three years ago. The Litvinenko case has been a key irritant in Russian-British relations, and one cannot speak about it without mentioning Mr. Miliband. He was appointed Secretary of State for Foreign and Commonwealth Affairs in June 2007. One of his first Russia-related cases was the expulsion of three Russian diplomats in response to Moscow denying London's request to extradite Andrei Lugovoi. Mr. Miliband had demanded the extradition of supposedly the only culprit in the Litvinenko murder. Sergei Lavrov replied that it was impossible since: A) Russia is not going to change its Constitution and B) British evidence was insufficient. This situation mirrors the controversy over Russian asylees. Moscow has demanded the extradition of Boris Berezovsky and Akhmed Zakayev more than once, but Britain says the Russian Prosecutor General's Office hasn't submitted the requisite documents allowing an extraction.

The personal relationship between Mr. Miliband and Mr. Lavrov could not be worse. The British even assert that last September Mr. Lavrov allegedly lashed out at Mr. Miliband saying he would not listen to his preaching and reprimands in a telephone conversation initiated by his British counterpart right after the war in South Ossetia started. Moscow asserts this never happened. Knowing Mr. Lavrov as a diplomat, this hardly seems likely. In the diplomatic community, he is considered experienced and skillful. However, knowing Mr. Lavrov as a person, it's very easy to believe.

All in all, something has to change in relations with Britain. This applies to both Moscow and London, since they are equally responsible for this conflicted relationship.

The fact is that the British secretary didn't need to come to Moscow to reach these agreements with his Russian counterpart on November 2. The declarations on non-proliferation support, stabilization in Afghanistan and support for the plans to enrich Iran's uranium in Russia could have been released without the visit.