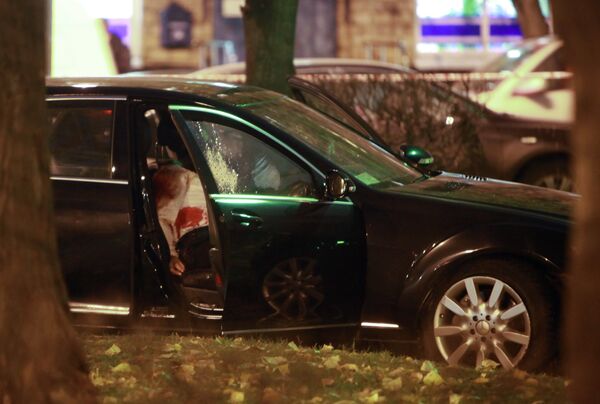 Russian-Israeli businessman Shabtai von Kalmanovich was shot dead in central Moscow on Monday, bringing an end to a colorful life that had seen a flirtation with showbiz and a conviction for spying.

MOSCOW, November 2 (RIA Novosti) - Russian-Israeli businessman Shabtai von Kalmanovich was shot dead in central Moscow on Monday, bringing an end to a colorful life that had seen a flirtation with showbiz and a conviction for spying.

Unidentified assailants armed with a 9mm automatic and a pump-action shotgun opened fire at fifty-nine-year-old Kalmanovich as he sat in his black Mercedes S500 on Moscow's Krasnopresnenskaya Embankment at about 4:50 p.m. Moscow time (1:50 GMT). The shooting took place a short distance away from the spot where Ruslan Yamadayev, a former member of the Russian lower house of parliament, was assassinated in September 2008.

Kalmanovich died instantly and his driver, who initially tried to give chase, was forced to pull over outside the capital's 16th century Novodevichy Convent due to serious injuries.

Investigators have said the attack bears all the hallmarks of a contract killing. They have also not ruled out that the murder was linked to Kalmanovich's business activities.

Born in 1949 in Soviet Lithuania, Kalmanovich left the U.S.S.R. with his family for Israel in 1972, where he graduated from Jerusalem University. In 1988, he was sentenced to nine years in jail for spying for the Soviet Union, but released in 1993.

He then left Israel and returned to Moscow, via a short stint in Sierra Leone, quickly finding his way in the chaotic dawn of post-Soviet capitalism. One of his business partners in the 1990s was reported to be Iosif Kobzon, the wildly popular Soviet-era singer and member of Russia's lower house of parliament. In 1995, Kobzon was refused entry to the U.S. due to concerns over alleged mafia links.

In the mid-1990s, Kalmanovich undertook the reconstruction of central Moscow's Tishinsky market into a massive shopping centre. The foundation stone was laid by Moscow mayor Yury Luzhkov in 1995.

He was also involved in organizing Moscow concerts by Michael Jackson, Liza Minnelli and Jose Carreras. Media reports even alleged a romantic involvement with Minnelli.

Reports also suggested he was friends with the late notorious crime boss Vyacheslav Ivankov, nicknamed Yaponchik. Ivankov was gunned down in late July after leaving a restaurant in northern Moscow. He died of his injuries in early October.

In the years before his death, Kalmanovich had pumped large amounts of money into the Spartak - Moscow Region women's basketball team, playing U.S. sportswomen high wages to attract them to Russia. His policy paid off, and the club has been the Women's European League Champion for the last three years. Two weeks ago the club won the European Super Cup after beating Euro Cup Champions Galatasaray.