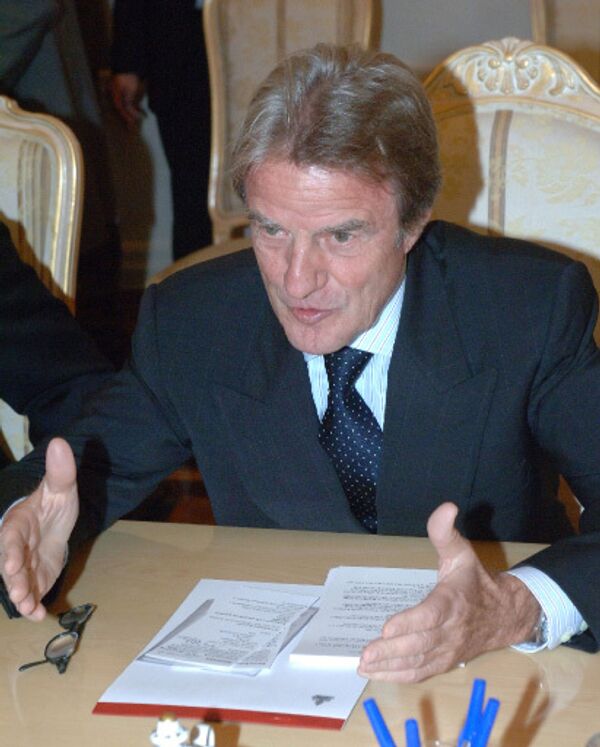 © RIA Novosti
Subscribe
The Iran Six will not tolerate delaying tactics from Tehran on a UN-sponsored nuclear fuel deal, the French foreign minister said on Monday.

"We are waiting for Iran to formally accept the proposition made by the International Atomic Energy Agency [IAEA]. If the Iranian response is to stall, as it seems to be, we will not accept this," Bernard Kouchner said.

Iran said earlier on Monday it wanted more talks on the deal, including fuel delivery guarantees, and also stated it would like to buy directly enriched material.

"We are ready to purchase fuel under IAEA supervision from any producer - we bought this type of fuel from Argentina about 20 years ago in cooperation with the agency," said Ali Asghar Soltanieh, Tehran's envoy to the International Atomic Energy Agency (IAEA).

He also said Iran wanted to address "technical issues", specifically "guarantees for the supply of the fuel as soon as possible" under IAEA supervision.

A senior Iranian lawmaker on Saturday criticized a plan that requires the country to send its nuclear fuel abroad for processing due to a lack of guarantees over its return.

"It is not reasonable to send all of Iran's 1,200 kilograms of low-enriched uranium (LEU) to foreign countries and expect they would provide the required nuclear fuel for the Tehran Research Reactor," said Kazem Jalali, rapporteur of the Majlis National Security and Foreign Policy Commission.