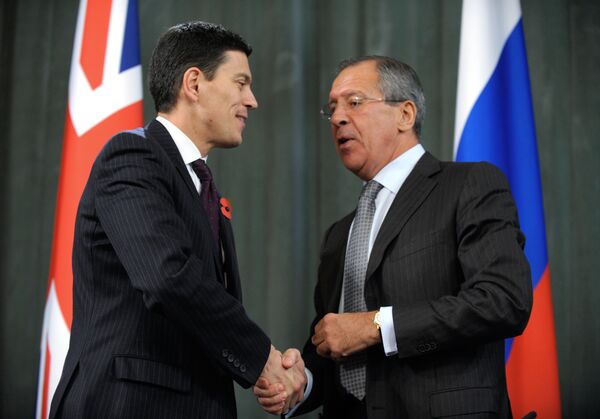 Miliband is the first British top diplomat to visit Russia in five years. Relations have been frosty since the fallout following the death of Russian security service defector Alexander Litvinenko in London in 2006. Other disputes have included Russia's pressure on the British Council, the U.K.'s refusal to extradite fugitive Russian businessmen and U.K. criticism over Russia's war with Georgia in August 2008.

The ministers confirmed the two countries' commitment to create conditions for a nuclear-free world. However, Lavrov said after a meeting with Miliband that Russia had no plans to completely abandon nuclear weapons.

"If there were only five nuclear powers in the world and they abandoned their nuclear weapons, after which only conventional weapons - muskets, cannons, and pistols - remained, we would have disarmed ourselves a long time ago," Lavrov told a news conference.

Regarding Afghanistan, the two ministers said: "The international community should continue rendering Afghanistan and the Afghan nation consistent and coordinated support."

Lavrov and Miliband also expressed their commitment to reaching "overwhelming, just and firm settlement of the Arab-Israeli conflict."

On Iran, the sides said it was necessary to focus on three points reached at the October 1 meeting in Geneva: implementation of a scheme to supply fuel for the Tehran research reactor, inspection of a facility near the town of Qom, and the summoning of a regular meeting of the Iran Six.

Although they were able to agree on international issues, Lavrov and Miliband failed to make breakthrough on the issue of the extradition of Andrei Lugovoi, Britain's main suspect in the Litvinenko murder.

London has accused Lugovoi of poisoning Litvinenko with a rare radioactive isotope. Litvinenko's associates in London said the murder was orchestrated by Moscow. Russian officials have denied the charge.

Lugovoi, 42, was elected a member of the Russian lower house of parliament in 2007.