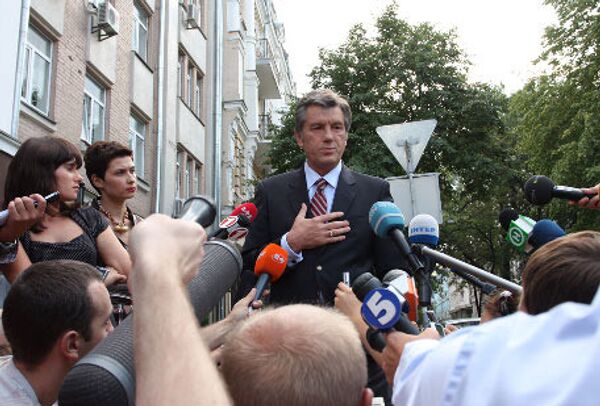 Ukraine's president has asked the international community for help dealing with a flu epidemic that the country's Health Ministry said on Sunday has killed 53 people.

KIEV, November 1 (RIA Novosti) - Ukraine's president has asked the international community for help dealing with a flu epidemic that the country's Health Ministry said on Sunday has killed 53 people.

"The current threat to the national security of Ukraine, which we cannot offset by just our own efforts, requires me to turn to our closest friends and strategic partners for emergency assistance," Viktor Yushchenko said in a letter posted on the presidential administration web site.

Letters were sent on Sunday to the leaders of Belarus, Hungary, Moldova, Poland, Russia, Romania, Slovakia and the United States, as well as to the European Commission president and secretary general of NATO.

"In the letters, Viktor Yushchenko also contains a list of the medicines and medical equipment that are necessary first of all for our nation to effectively counter the spread of epidemic influenza," a statement on the site said.

Ukraine has already received offers of assistance from Slovakia, Hungary, Romania, Russia and Poland, including for the delivery of vaccines and medical masks.

The Health Ministry said the 53 people had died from influenza or acute respiratory infections, but it was not clear how many of the deaths were related to the H1N1 virus. There was an outbreak of swine flu in western Ukraine in the middle of the week, but recent data only confirmed 13 cases and one death.

The ministry said that 184,919 people were sick with flu or colds, with 7,383 requiring hospitalization, 123 in serious condition.

The government has announced quarantine in nine areas in western Ukraine, and banned public events across the country and closed schools. A team of experts from the World Health Organization is due in the country on Monday.

"In response to the request from the Minister of Health of the Ukraine, WHO is deploying a multi-disciplinary team of experts to assist national authorities in mitigating the impact of the pandemic," the WHO said on Sunday in a statement on its web site.