Spartak keep up pressure on Rubin with 5th-straight win 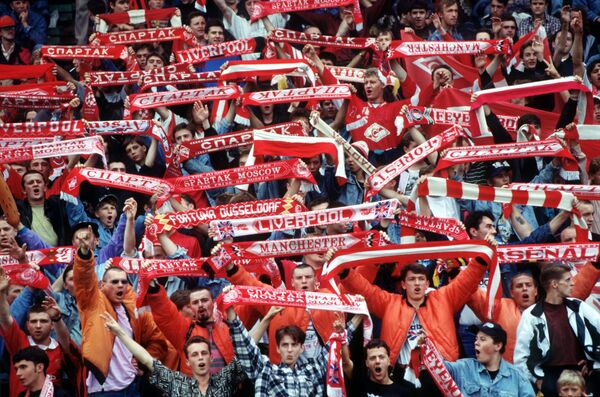 Spartak Moscow extended their winning streak to five games with a 5-1 demolition of Rostov on Sunday, cutting the gap to Rubin at the top of the table to one point after the leaders' win on Friday.

MOSCOW, November 1 (RIA Novosti) - Spartak Moscow extended their winning streak to five games with a 5-1 demolition of Rostov on Sunday, cutting the gap to Rubin at the top of the table to one point after the leaders' win on Friday.

The championship is now a two-horse race following Zenit St. Petersburg's 1-0 defeat by FC Moskva on Saturday, which leaves the two clubs level on points in third place.

With Rubin throwing down the gauntlet on Friday night with a 4-1 drubbing of Krylya Sovetov - their best league result since early September - Spartak responded in fine style, taking a 2-0 lead in at half time and scoring three in the second half after Rostov had pulled one back five minutes after the break.

Rostov were on the back foot from the start, relying on counterattacks even before Brazilian Alex opened the scoring in the 19th minute. Eighteen-year-old Pavel Yakovlev came off the bench in after 25 minutes and got the second a quarter of an hour later.

Although Moldovan Alexandr Gatcan got Rostov back in the game in the 51st minute, Alex added his second just before the hour, giving himself 10 league goals for the year, and another of Spartak's young talents, 17-year-old Georgian Zhano Akanidze, made the game safe with 15 minutes to go.

The rout was completed in the 81 minute by Welliton, the Brazilian bringing his league-best season total to 20 goals. Spartak's last five games have now been won by an aggregate of 18-2, and they visit Krylya Sovetov next week hoping for more before facing CSKA Moscow and Zenit in their final two games.

Rostov remain on 31 points, seven ahead of Kuban, who are five points adrift in the last relegation spot following a 4-0 defeat at third-from-bottom Spartak Nalchik on Sunday.

Rubin stretched their winning run to three games - four if you include the victory over Barcelona in Spain - as they recover from a stutter that coincided with the start of the Champions League.

Playing on Friday to give the players extra rest ahead of Barcelona's visit to Kazan on Wednesday, Rubin recorded their biggest win since ending a run of six victories - by and aggregate of 20-2 - with a 5-1 win over Saturn.

The defending champions had to wait until after half time to break the deadlock, Ecuadorean midfielder Christian Noboa scoring in the 48th minute, and young Russian striker Alexander Bukharov made it two eight minutes later.

Although giant Czech forward Jan Koller scored for the Samara side five minutes later, the two-goal margin was quickly restored by Turkey's Gokdeniz Karadeniz, who scored the winner against Barcelona on October 20. The win was sealed in the 75th minute, when Bukharov picked up his 15th league goal of the season to bring himself level with top scorer Alejandro Dominguez, whose tally includes eight penalties.

After hosting European champions Barcelona on Wednesday, Rubin travel to Moscow to face CSKA, before playing Zenit at home and Kuban away to finish the league season.

CSKA are at Manchester United on Tuesday, and also have the benefit of an extra day's rest after Friday's 1-0 win over Terek. Tomas Necid scored the only goal after three minutes, but new coach Leonid Slutsky will face a sterner test at Old Trafford, particularly after a disappointing showing against the English title holders in Moscow two weeks ago.

CSKA are now in a four-way race for Russia's last Champions League spot, with Alexander Sheshukov's 85th-minute goal giving FC Moskva a 1-0 win over Zenit on Saturday and Lokomotiv Moscow beating Tom 3-1 in Tomsk on Sunday.

Although the prize of the Champions League qualifiers is on offer, one of the four will miss out on Europe altogether, as there are only two Europa League places available. Although Lokomotiv are sixth on 45 points, their run-in is easier, while CSKA and Zenit, on 46 and 47 points, both still have the top two to play.