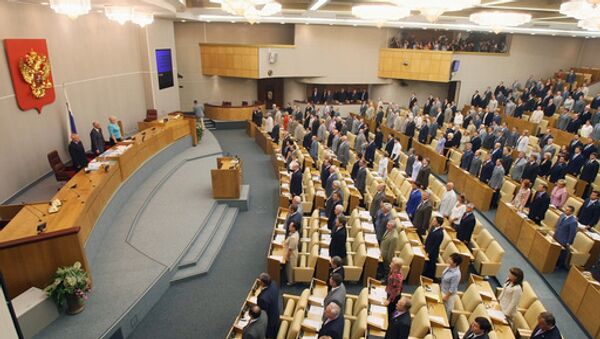 © RIA Novosti
Subscribe
International
India
Africa
The upper house of the Russian parliament will review on Friday amendments to a law on defense which expands the use of the Russian Armed Forces abroad in certain situations.

MOSCOW, October 30 (RIA Novosti) - The upper house of the Russian parliament will review on Friday amendments to a law on defense which expands the use of the Russian Armed Forces abroad in certain situations.

President Dmitry Medvedev submitted the amendments to parliament in August, just after the first anniversary of Russia's five-day war with Georgia. The lower house of the Russian parliament, the State Duma, passed the bill on October 23.

The amendments stipulate that Russian troops can be used abroad to repel an attack on Russian military units or other troops deployed outside the country, to repel or prevent an armed attack on another state asking Russia for military assistance, to defend Russian citizens abroad from an armed attack, to combat sea piracy and to ensure safety of commercial shipping.

"The new amendments will create a solid legal foundation for the quick and timely deployment of the Russian Armed Forces abroad and, therefore, strengthen the security of the Russian state," Viktor Ozerov, the head of the Federation Council's committee on defense and security, said on Thursday.

Russia's current 2006 legislation only allows the president to send troops to fight terrorism on foreign soil. Experts have said the law lacks clearly defined terms of "wartime" and a "combat situation," which complicates the deployment of army units outside the country.

In line with the new document, the Russian president will be entitled to make a decision on using armed forces abroad based on a prior approval by the upper house of the Russian parliament. The president would also be able to determine the strength of the troops to be used abroad and their deployment areas, to set the goals facing them and determine the timeframe of their deployment.