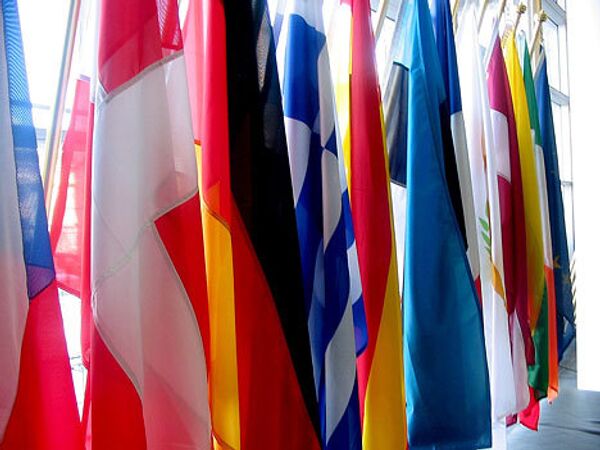 © www.wikipedia.org
Subscribe
EU leaders agreed on Thursday to demands from the Czech president in return for the country's ratification of the ambitious EU reform treaty, the Swedish prime minister has announced.

BRUSSELS, October 30 (RIA Novosti) - EU leaders agreed on Thursday to demands from the Czech president in return for the country's ratification of the ambitious EU reform treaty, the Swedish prime minister has announced.

The reform treaty, also known as the Lisbon Treaty, is an international agreement signed in Lisbon on December 13, 2007 which is expected to change the workings of the European Union.

Only the Czech Republic has so far refused to ratify the document, which needs the approval of all 27 EU members to take effect.

"The road to ratification stands open," Fredrik Reinfeldt, whose country currently holds the EU's rotating presidency, said after a EU summit in Brussels.

He said the agreed modifications to the text of the treaty will be included in a separate protocol to the document to be signed after the basic agreement has been ratified.

Czech President Vaclav Klaus has demanded, among other things, an opt-out for his country from the EU Charter of Fundamental Rights over fears of property claims by Germans expelled after WWII and asked the Czech Constitutional Court to review the treaty to see whether it conforms to the country's constitution.

He said earlier he would not sign the ratification until the Constitutional Court made a decision, citing the reform treaty as a threat to the country's national sovereignty in its current form. The court is expected to rule on the treaty on November 3.

Experts believe, though, that the EU decision on Thursday practically removed the last obstacle on the way to the reformed European Union, as Czech Prime Minister Jan Fischer said after the summit that Klaus "was satisfied" with the text of the declaration by the EU leaders.