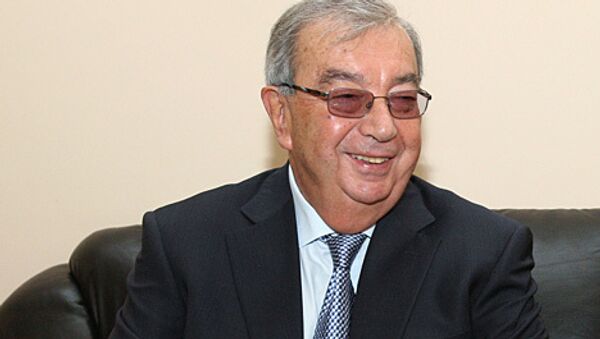 © RIA Novosti . Сергей Субботин
Subscribe
Yevgeny Primakov, who as Russian prime minister in 1999 turned his plane around en route to Washington when the bombing of Serbia began, celebrated his 80th birthday on Thursday.

MOSCOW, October 29 (RIA Novosti) - Yevgeny Primakov, who as Russian prime minister in 1999 turned his plane around en route to Washington when the bombing of Serbia began, celebrated his 80th birthday on Thursday.

Primakov was born on October 29, 1929, in Kiev and grew up in Tbilisi. During his many years of service to the Soviet and Russian states, he has been chief of the intelligence service, the last speaker of the Soviet parliament, Russia's foreign minister and prime minister. He is still carrying out official duties as head of the Russian Chamber of Trade and Industry and a member of the Presidium of the Russian Academy of Sciences.

To mark the occasion, President Dmitry Medvedev awarded Primakov the Order for Service to the Fatherland - First Class, and Patriarch Kirill of Moscow and All Russia conferred upon him the Order of Saint Blessed Prince Daniil of Moscow - First Class.

"You are one of the leading Orientalists, an outstanding expert in the field of global economy and international relations. Serving in high-level government positions, you attained nationwide respect for your professionalism and ability to defend fairly and in a responsible manner the state's interests in the most difficult conditions," the patriarch said in a statement.

"Heading the Russian Chamber of Trade and Industry, you contribute to the strengthening of Russia's economic sovereignty," he added.

Primakov was a compromise candidate when appointed Russian prime minister in September 1998 after the parliament refused to confirm President Boris Yeltsin's first choice, Viktor Chernomyrdin, but became a popular figure as Yeltsin's presidency began to disintegrate.

With a world view colored by years of proximity to the KGB, he was a staunch defender of Russia's interests internationally, and showed his steel - and not a little flair - in March 1999 when NATO started its bombing campaign against Serbia.

Primakov was flying over the Atlantic on the way to Washington for an official visit, but he ordered the plane to turn around and return to Moscow.

Less than two months later, the increasingly erratic president had replaced Primakov, who was emerging as a possible future president. The presidential bid was abandoned less than two months before Vladimir Putin's election in March 2000, but Primakov quickly became an ally of the new president and was appointed head of the Russian Chamber of Trade and Industry in December 2001.