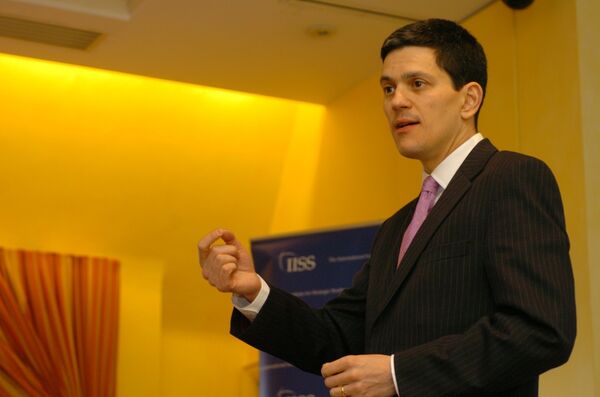 © Foreign & Commonwealth Office
Subscribe
The visit to Russia by British Foreign Secretary David Miliband due later this week could foster better ties between Moscow and London, the Russian Foreign Ministry said on Thursday.

MOSCOW, October 29 (RIA Novosti) - The visit to Russia by British Foreign Secretary David Miliband due later this week could foster better ties between Moscow and London, the Russian Foreign Ministry said on Thursday.

Miliband is expected to arrive in Moscow on Sunday for the first visit by a British foreign secretary in five years. He will hold talks with his Russian counterpart, Foreign Minister Sergei Lavrov.

"We are pleased to note that lately Russian-British relations have been showing certain positive trends," spokesman Andrei Nesterenko said. He expressed the hope that Miliband's visit would "help consolidate the trends."

The Russian diplomat described Britain as a key partner in politics and business and one of the major investors in the Russian economy.

In an interview with The Financial Times published on Wednesday, Miliband said he did not expect "to resolve the key problems in the U.K.'s bilateral relationship with Russia."

British-Russian relations have been consistently frosty since the diplomatic fallout following the death of Russian security defector Alexander Litvinenko in London three years ago. Russia refused to extradite a key suspect in the murder, leading to tit-for-tat expulsions of diplomats.

Other disputes have included Russian authorities' pressure on the British Council, Britain's refusal to extradite fugitive Russian businessmen, and Britain's criticism over Russia's conflict with Georgia in August 2008.

"We're not changing those," Miliband told the FT.

"On our part, everything is ready for a reset," Lavrov told reporters.