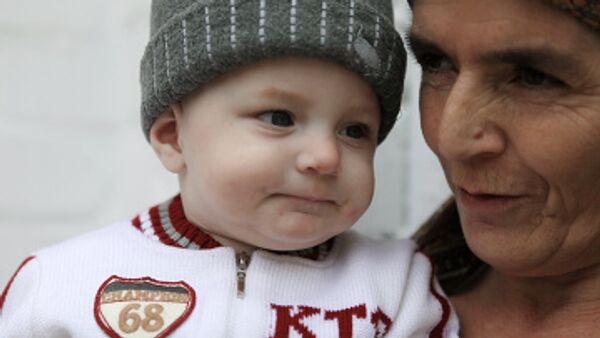 Subscribe
A 9-month-old boy whose skin reportedly reveals verses from the Koran from time to time, will be brought to Moscow's main mosque on Saturday, the head of the Islamic Cultural Center said on Thursday.

MOSCOW, October 29 (RIA Novosti) - A 9-month-old boy whose skin reportedly reveals verses from the Koran from time to time, will be brought to Moscow's main mosque on Saturday, the head of the Islamic Cultural Center said on Thursday.

The child and his family will travel from their home in Dagestan to meet with Ravil Gainutdin, who heads the Russian Mufti Council, as well as with believers in the Moscow Congregational Mosque

"A reception of the Yakubov family from the Kizlyar district of Dagestan will be held in the mosque by mufti Gaynutdin," said Abdul-Vahed Niyazov, who is an organizer of the visit.

"The boy, on whose body verses from the Holy Koran periodically appear, will be shown to the wider Muslim community, including religious leaders, diplomats, ambassadors and ordinary believers," he said.

Niyazov said everyone will have a chance to see the miraculous child with his own eyes.

After the meeting with Moscow Muslims, the Yakubov family will return home to Dagestan, he said.

The infant's mother told RIA Novosti verses from Islam's holy book appear on her son's body on Mondays and Fridays. Madina Yakubova said the boy's temperature rises to 40 degrees Celsius, and the boy cries and weeps on these days. The inscriptions are seen for three days and then disappear little by little, and new verses show up on the baby's body.

A representative of a local mosque confirmed the mother's account.

However, the head of the scientific advisory department at the Institute of Immunology of the Federal Medical-Biological Agency said the "verses" were probably the result of mechanic or chemical action on the baby's skin.

Lyudmila Luss suggested the baby could suffer from so-called "urticarial dermographism," a disease that affects 5% of the population. Dermographism, which is translated from Greek as "skin writing," means the skin of an affected person becomes raised and inflamed when stroked or rubbed with a dull object.

The doctor said medical examination was required to determine the baby's exact diagnosis.