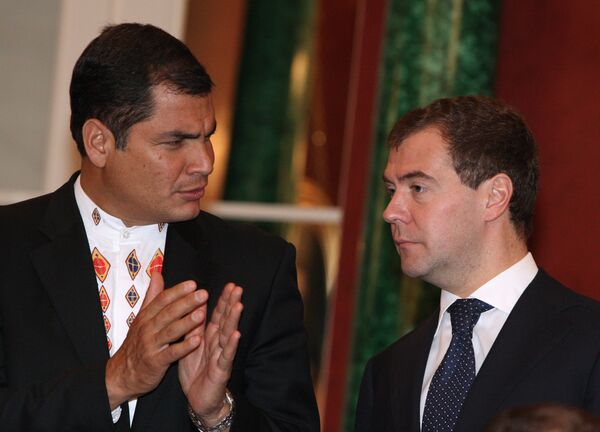 © RIA Novosti . Mikhail Klimentyev
/
Go to the photo bank
Subscribe
The leaders of Russia and Ecuador signed on Thursday in Moscow a declaration on strategic partnership in politics, security, environmental protection, education, science, culture and tourism.

MOSCOW, October 29 (RIA Novosti) - The leaders of Russia and Ecuador signed on Thursday in Moscow a declaration on strategic partnership in politics, security, environmental protection, education, science, culture and tourism.

Rafael Correa, who is the first Ecuadorian leader ever to visit Russia, arrived in Moscow on a three-day visit on Wednesday to discuss energy, oil and defense cooperation.

At a meeting with Correa, Russian President Dmitry Medvedev praised bilateral trade "which is nearing a substantial amount of almost $1 billion."

Ecuador, famous for its rose exports, which make over 73% of all of the country's exports, posted $403 million in sales of roses in 2008. Russia purchases slightly more than 10% of Ecuador's roses.

After the Medvedev-Correa meeting, a contract was signed for the supply of two Mi-171E Hip helicopters to the Ecuadoran Ground Forces.

Today's talks also produced intergovernmental agreements on cooperation in the peaceful use of nuclear energy and on bilateral customs assistance. A memo of understanding on energy cooperation was also signed between the Russian Energy Ministry and the Ecuadoran Ministry of Electricity and Renewable Energy.

"We would like to develop good neighbor, full-format relations with all Latin American countries," the Russian leader told reporters after the talks.

Ahead of Correa's visit, Russia's respected business daily Kommersant pinned hopes that Moscow could try to persuade Ecuador to follow suit of its neighbors, Nicaragua and Venezuela, in recognizing the former Georgian republics of Abkhazia and South Ossetia as independent.