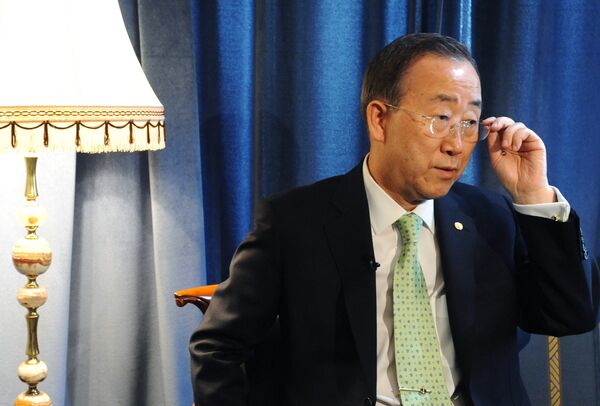 "The inspection of the new Iranian enrichment site in Qom, conducted by the International Atomic Energy Agency (IAEA) this week, is a positive step," Ban Ki-moon told a news conference.

"Meeting with President [Mahmoud] Ahmadinejad in September, I urged Tehran to take this step and cooperate fully with the IAEA on all outstanding issues," he said.

The Islamic Republic announced in September it was building a new nuclear fuel enrichment plant near the city of Qom, some 100 kilometers south of Tehran, fueling fresh suspicions about its secret weapons program and sparking calls for harsher sanctions against the country.

The IAEA, the UN nuclear watchdog, demanded Tehran provide detailed information on and access to the facility as soon as possible.

Ban Ki-moon also praised a draft agreement circulated by the IAEA, which would have Iran send out its uranium to Russia, where it would be enriched, and to France to prepare it for use at a research reactor in Tehran.

Ban said he hoped Iran would sign the agreement that "would constitute an important confidence-building measure and could set the stage for further advances in the negotiations between Iran and the EU3+3" in reference to Iran's talks with the five UN Security Council members (Britain, France, Russia, China, the U.S.) and Germany.

The six nations have been trying to persuade Iran to halt uranium enrichment for economic and diplomatic incentives.

Tehran said it would respond to the proposal on Thursday in Vienna.