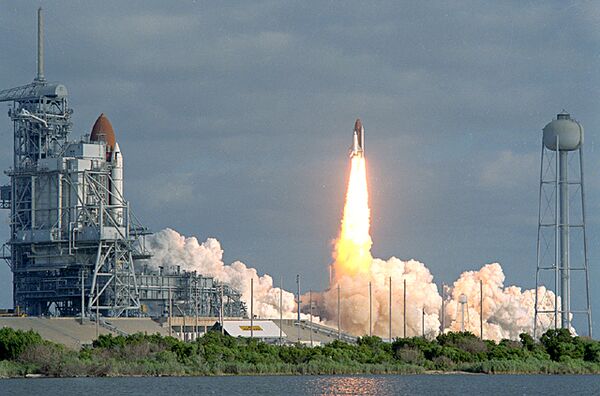 The Ares I-X rocket, equipped with 725 sensors, took off at 11:30 a.m. (15:30 GMT) from a former shuttle launch pad at the Kennedy Space Center following a delay due to bad weather.

The flight was followed by the separation of the booster and the upper stage over the Pacific Ocean. The booster will be retrieved from the ocean by recovery ships for future analysis by NASA experts.

The launch is NASA's first flight test for the new spacecraft, central to the agency's plans for human spaceflight after the shuttle fleet is retired in 2010-2011.

The Ares I-X is part of a larger flight test program that will provide data for future launch vehicles and give NASA an opportunity to test and prove hardware, facilities and ground operations.

Skeptics say NASA will not be able to put Ares into operation earlier than 2016. If so, the US will have to use Russian space agency Roscosmos' services to send its astronauts to the International Space Station.

Meanwhile, Roscosmos announced on Wednesday it had developed a design for a piloted spacecraft powered by a nuclear engine to boost its own space exploration program, including manned flights to the Moon and Mars.