No survivors in private jet crash near Minsk - emergency services 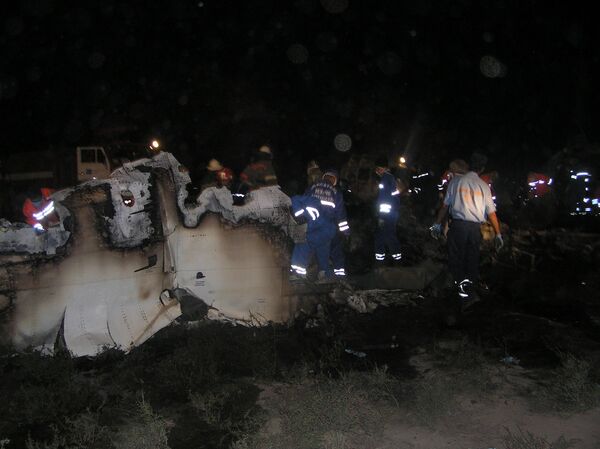 © RIA Novosti
Subscribe
No survivors were found at the crash site of a Russian business jet near the Minsk airport, an emergency services official in Belarus said on Tuesday.

MINSK, October 27 (RIA Novosti) - No survivors were found at the crash site of a Russian business jet near the Minsk airport, an emergency services official in Belarus said on Tuesday.

A Hawker-125 executive jet flight took off at 21:06 Moscow time (18:06 GMT) on Monday from the Vnukovo airport in Moscow and disappeared from radar screens at 22:35 (19:35 GMT) on approach to the Minsk international airport.

"The emergency services are working at the crash site. An investigation into the causes of the crash will involve an S-Air representative," the official from the Belarusian emergencies ministry told RIA Novosti.

The Moscow-based S-Air company, the operator of the jet, said there were six people on board, including three passengers and three crew members. However, Russian air traffic control officials claim that three were only two passengers on board because the third missed the flight.

According to preliminary information, the plane failed to make the landing from the first attempt and was lost by traffic controllers following the second attempt to land in normal visibility and satisfactory, although rainy, weather conditions.

The wreckage of the plane was found 4 kilometers (2.5 miles) from the runway.

The CEO of the S-Air airline, Marat Romashkin, was reportedly on board the plane.

S-Air is a small private company, which provides charter services to top-level executives and government officials.