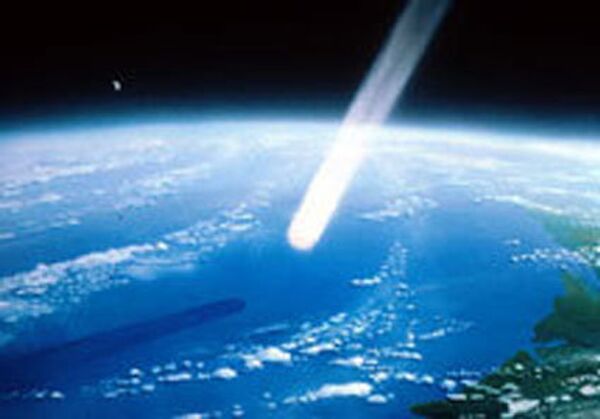 Latvian mobile operator Tele2 was involved in staging a hoax on a meteorite allegedly falling in the country on Sunday as reported by local media, the operator's marketing and sales director said Monday.

RIGA, October 26 (RIA Novosti) - Latvian mobile operator Tele2 was involved in staging a hoax on a meteorite allegedly falling in the country on Sunday as reported by local media, the operator's marketing and sales director said Monday.

Janis Sprogis' confession to the Leta news agency followed a statement by the country's interior minister, Linda Murniece, vowing to recoup the costs of investigating the reports of a meteorite strike.

"I think they [those who staged the story] will have to pay for the work of all special services involved in the case. The sum will be big. People should be held accountable for such jokes," Murniece said.

Sprogis promised to compensate the state for its losses.

The owner of the land where the meteorite purportedly landed was reported to have charged visitors $2 to have a look at the crater.

Latvian and Estonian scientists who studied the incident site said earlier on Monday that the meteorite story was a fake.

"The crater was dug artificially, probably with shovels. No meteorite or satellite fragments were discovered there. This entire story turned out to be a hoax. The meteorite is a fake," said Ilgonis Vilks, the head of the University of Latvia's Astronomy Institute.

Latvian media said a celestial body fell near a residential house on the outskirts of Mazsalaca town in the Valmiera district of Latvia, leaving a crater of some 20 meters (66 feet) in diameter and 10 meters (33 feet) deep. Some experts said the body could have been a satellite or its fragment.

Video footage showed a fire at the bottom of the crater. A witness who said he saw the object falling described a burning trail in the sky and a noise similar to that made by an aircraft flying at low altitude.