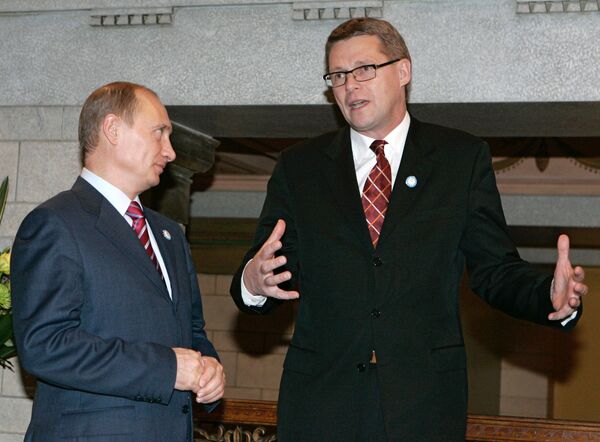 "The discussions will address the general condition of and prospects for bilateral cooperation during the global economic crisis, and implementation of joint projects. Particular attention will be given to energy cooperation - primarily the Nord Stream natural gas pipeline," the Russian government press service said in a statement.

The Finnish authorities are considering an application from the Nord Stream operator to lay the pipeline through Finland's economic zone in the Baltic Sea.

The Nord Stream pipeline, which will pump gas from Siberia to Europe under the Baltic Sea, bypassing East European transit countries, is being built jointly by Gazprom, Germany's E.ON Ruhrgas and BASF-Wintershall, and Dutch gas transportation firm Gasunie at an estimated cost of $12 billion.

On Tuesday, Denmark became the first country to approve the pipeline's route. The Danish Energy Agency said the pipeline would run through 88 km (55 miles) of Denmark's territorial waters and 50 km (31 miles) of its exclusive economic zone.

The ambitious project is scheduled to be completed in 2012, but its environmental safety has been questioned by several of the transit countries, including Finland.

The first of two parallel pipelines, approximately 1,200 kilometers (750 miles) long, each with a transport capacity of some 27.5 billion cu m per annum, is to become operational in 2010.

Putin and Finnish Prime Minister Matti Vanhanen will also discuss cooperation in science and technology, transport and finance, as well as issues of bilateral and international environmental cooperation in the Baltic region.

The two the heads of governments will also participate in a ceremony for the opening of a Finnish cultural, scientific and business center in St. Petersburg. This project is timed for the 200th anniversary of Finnish autonomy within the Russian empire, a step that laid the foundations for the modern Finnish state.