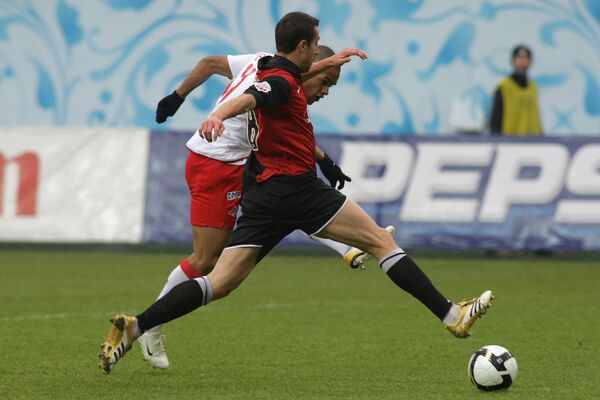 © RIA Novosti . Georgiy Kurolesin
/
Go to the photo bank
Subscribe
Spartak Moscow cruised to the top of the Russian Premier League on Saturday with a 3-0 win in the capital's northern suburb of Khimki, confirming the home side's relegation from the top flight.

MOSCOW, October 24 (RIA Novosti) - Spartak Moscow cruised to the top of the Russian Premier League on Saturday with a 3-0 win in the capital's northern suburb of Khimki, confirming the home side's relegation from the top flight.

The perennial 1990s champions have 52 points, two ahead of Rubin, with the title holders visiting Rostov on Sunday.

League top scorer Welliton broke the deadlock in just the ninth minute with his 18th goal of the season, and added his 19th with a header with two minutes to play. In between, Sergei Parshivlyuk struck from distance.

The match was policed by 1,500 officers and Interior Ministry troops, with 61 arrests made, mostly of Spartak fans for drunken behavior and lighting flares.

Khimki have just 10 points and no wins since July, and their relegation had long looked unavoidable, but it has been sealed with four games remaining.

In Saturday's late game, Lokomotiv Moscow hosted another Moscow Region side, Saturn, but failed to bounce back from last week's 3-0 defeat by Spartak, needing a late Dmitry Sychev goal to grab a draw.

Saturn were ahead twice, first through an Andrei Karyaka penalty, canceled out by Tomislav Dujmovic's goal, and then when Vladimir Kuzmichev capitalized on a mistake in the home defense.

But the visitors had Brazilian defender Luiz Ricardo da Silva sent off for two bookable offenses with 12 minutes to go and could only hold out for 10 of them before the Railwaymen's pressure told through Sychev.

The draw means Lokomotiv could slip from the fifth and final European place if FC Moskva win at Luzhniki against CSKA Moscow on Sunday. The army club lies fourth, however, and although its title hopes are fading it will be fighting for the third Champions League spot, with Zenit St. Petersburg just three points ahead.

The 2007 champions host Spartak Nalchik in St. Petersburg and anything but a win will seriously hurt their hopes of winning the league for the second time. Zenit are four points off Rubin and six behind Spartak, who they face in the final two games of the season.