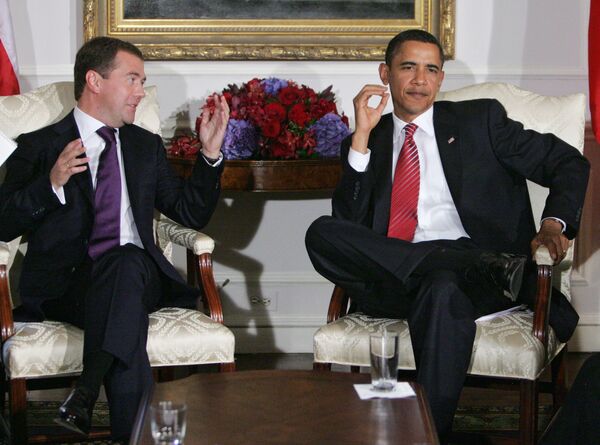 © RIA Novosti
/
Go to the photo bank
Subscribe
The presidents of Russia and the United States hope that a treaty on nuclear arms cuts to replace START 1 will be ready by early December, the Kremlin said on Saturday.

MOSCOW, October 24 (RIA Novosti) - The presidents of Russia and the United States hope that a treaty on nuclear arms cuts to replace START 1 will be ready by early December, the Kremlin said on Saturday.

During a telephone conversation on Saturday, Dmitry Medvedev and Barack Obama discussed the progress of negotiations on a new agreement on reductions of strategic offensive armaments. The Strategic Arms Reduction Treaty, the main pillar of Russian-U.S. disarmament commitments, expires on December 5.

"Satisfaction was expressed with the intense dialogue carried out by the delegations of the two countries, and with the level of understanding reached," the Russian president's press service said.

The latest round of talks took place in Geneva earlier this week. At their first meeting, in London in April, the two presidents committed themselves to trying to agree a deal before START I expired.

The outlines of the new pact were agreed during their bilateral summit in Moscow in July and include cutting their countries' nuclear arsenals to 1,500-1,675 operational warheads and delivery vehicles to 500-1,000.

The Norwegian Nobel Committee awarded Obama the Peace Prize on October 9 for his efforts to build a world without nuclear weapons and the creation of a new climate in international politics, which has been helped by improved relations with Russia, a significant plank of Obama's foreign policy.

The Russian delegation in Geneva this week is headed by Anatoly Antonov, director of the Foreign Ministry's Department of Security and Disarmament, while the U.S. team of negotiators is led by Assistant Secretary of State Rose Gottemoeller.

START 1 obliges the countries to reduce nuclear warheads to 6,000 and their delivery vehicles to 1,600 each. In 2002, a follow-up agreement on strategic offensive arms reduction was concluded in Moscow. The document, known as the Moscow Treaty, envisioned cuts to 1,700-2,200 warheads by December 2012.