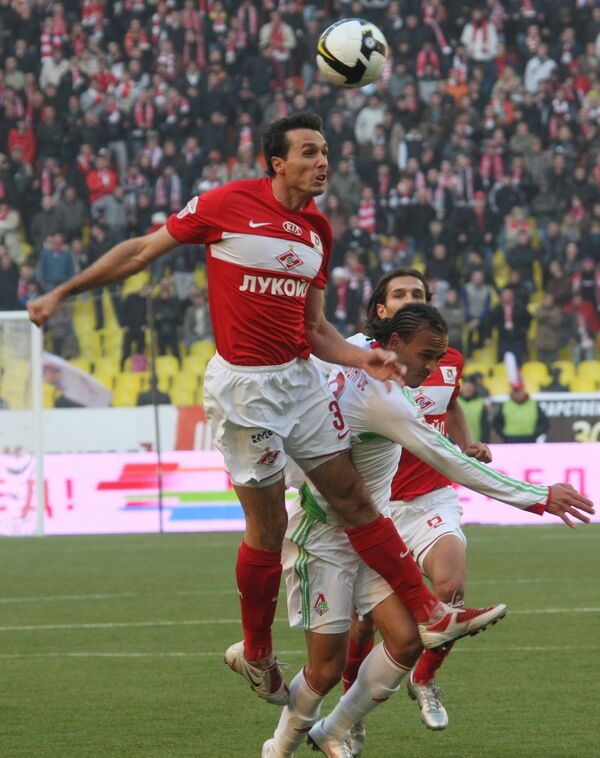 © RIA Novosti . Vladimir Fedorenko
/
Go to the photo bank
Subscribe
Spartak Moscow visit Khimki on Saturday hoping to return to the place that was theirs almost by right in the late 1990s - the top of the Russian Premier League.

MOSCOW, October 24 (RIA Novosti) - Spartak Moscow visit Khimki on Saturday hoping to return to the place that was theirs almost by right in the late 1990s - the top of the Russian Premier League.

A win for second-placed Spartak, just a point behind defending champions Rubin, would confirm Khimki's relegation from the top flight. The Moscow region side is 15 points from safety with five games left to play.

Khimki have won just twice all season, the last victory coming in July, and would seem to have little chance against league top scorer Welliton, who will be looking to add to his 17 goals in 23 games.

Spartak fans will also be expecting to see a third start for Georgian 17-year-old Zhano Ananidze, who became the Russian Premier League's youngest-ever scorer in the 3-0 win over cross-town rivals Lokomotiv last week..

The Railwaymen look to bounce back from that defeat on Saturday evening when they host Saturn. A win would put them fourth, ahead of CSKA and FC Moskva, who play each other on Sunday. CSKA need a win at Luzhniki to keep their slim title hopes alive, but trainer Juande Ramos will need to get more quality out of his side than they showed in Wednesday's draining 1-0 defeat to Manchester United in the Champions League, when the English title holders dominated possession and clinched victory with a late goal as the Muscovites tired.

League leaders Rubin will be boosted by their shock midweek win in Barcelona, and need to continue their recovery from four games without a win with victory in Rostov-on-Don in the last game of the weekend on Sunday evening.

The remaining title challengers, 2007 champions Zenit, host Spartak Nalchik in St. Petersburg. Four points off Rubin but like Spartak playing without the distraction of European football, Zenit have won six straight and face Rubin and Spartak Moscow in their final two games of the season.