Around 300,000 living with AIDS in Russia - Health Ministry 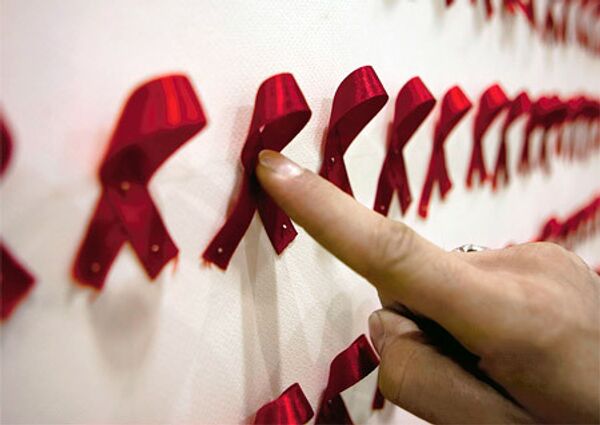 There are currently around 300,000 people living with AIDS in Russia, the country's top sanitary official said on Friday.

MOSCOW, October 23 (RIA Novosti) - There are currently around 300,000 people living with AIDS in Russia, the country's top sanitary official said on Friday.

Gennady Onishchenko said that 12,759 people died from AIDS in 2008, mainly as a result of circumstantial complications relating to the disease, not from its final stages. The figure was up 14% from the 2007 death toll of 11,159.

"Since 1987, from the first registered case of AIDS in [the Soviet Union], much time has passed, almost 22 years, and over that time 501,000 cases have been registered," Onishchenko told reporters.

Although no vaccine against HIV is expected to be developed in the near future, intense scientific research in the field is ongoing, he said.

"There are approaches, but no vaccine. How many years it will take to create one - I don't know," he said.

UNAIDS Executive Director Michel Sidibe said at an annual AIDS Vaccine Conference in Paris on Monday that "a ready to use vaccine against HIV could be more than a decade away."

Onishchenko said since 2008 Russia has spent some 1 billion rubles ($34.5 mln) on vaccine research.

According to the latest data provided by the Joint United Nations Program on HIV/AIDS (UNAIDS) in 2007, the number of AIDS cases worldwide stands at more than 33 million, including 1.6 million in Latin America. Countries in sub-Saharan Africa have the highest infection rates.