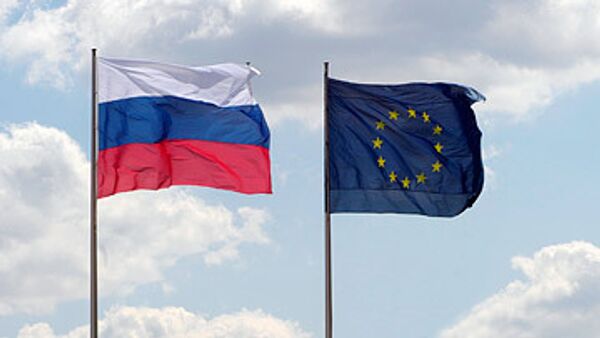 © Sergey Guneev
Subscribe
International
India
Africa
Russia and the EU have started negotiations on the wording of a new partnership and cooperation agreement, the Russian foreign minister said on Monday.

BRUSSELS, October 19 (RIA Novosti) - Russia and the EU have started negotiations on the wording of a new partnership and cooperation agreement, the Russian foreign minister said on Monday.

"The negotiators are moving on to harmonizing the concrete wording, and we today agreed to encourage the negotiators to look for compromise formulas and solutions based on a balance of interests," Lavrov said after a meeting of the EU-Russia Permanent Partnership Council in Brussels.

Lavrov also said the parties had discussed Russian-EU economic cooperation and Russia's initiative to sign a new Euro-Atlantic security treaty, as well as preparations for an upcoming Russia-EU summit, due on November 18 in Stockholm.

The current Russia-EU agreement expired in late 2007, but was automatically extended. In early October, the sixth round of talks on the new agreement took place in Brussels.

The previous Russia-EU summit took place on May 21-22 in Russia's Far Eastern city of Khabarovsk. Russia-EU summits are held twice a year - once in Russia and once in the country holding the European Union's rotating presidency.

A Permanent Partnership Council meeting on environmental protection will take place in Moscow on November 10, and a meeting focusing on freedom, security and justice, is scheduled for December 2 in Stockholm.