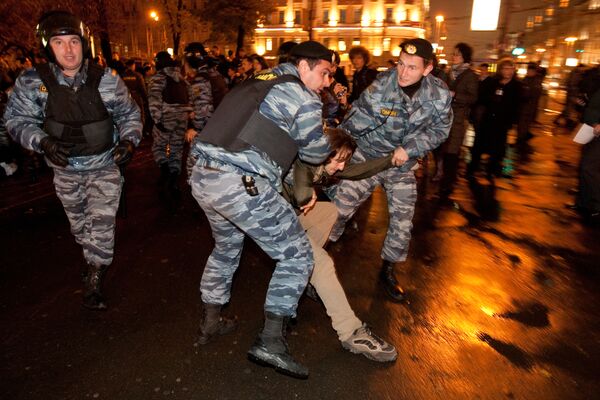 © RIA Novosti . Anton Belitskiy
/
Go to the photo bank
Subscribe
A number of people were detained in central Moscow on Friday during a protest over Sunday's regional elections.

MOSCOW, October 16 (RIA Novosti) - A number of people were detained in central Moscow on Friday during a protest over Sunday's regional elections.

Police said they had arrested 10 members of the Avangard Krasnoi Molodezhi (Red Youth Advance Guard) movement during an unsanctioned rally.

"The young people unfurled banners demanding the annulment of the results of polls in Moscow and Astrakhan," a police source told RIA Novosti. "However, they were detained by police officers."

He added that the detained had been taken to a local police station, where they were being "dealt with."

A spokesman for the Left Front coalition movement told RIA Novosti that 18 people had been detained after they began shouting "Shame" and "Freedom."

"People came to express their opinions, and the law doesn't say they have no right to do this. There was no rally," Anastasia Udaltsova said.

Russian media reported that OMON riot police officers had fired tear gas at residents of Dagestan's second city of Derbent, where around 14 of 36 polling stations failed to open on election day.