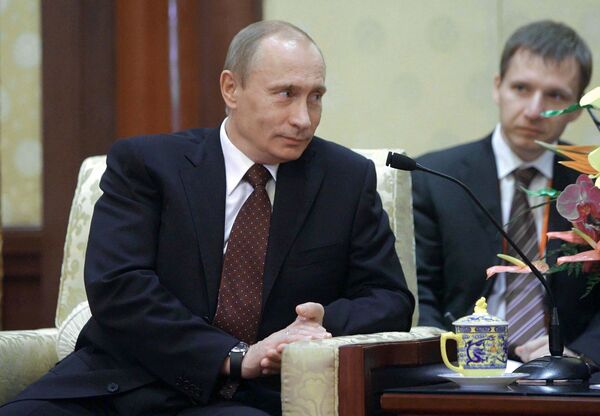 Russia is ready to consider using the Russian and Chinese national currencies instead of the dollar in bilateral oil and gas dealings, Prime Minister Vladimir Putin said on Wednesday.

BEIJING, October 14 (RIA Novosti) - Russia is ready to consider using the Russian and Chinese national currencies instead of the dollar in bilateral oil and gas dealings, Prime Minister Vladimir Putin said on Wednesday.

The premier, currently on a visit to Beijing, said a final decision on the issue can only be made after a thorough expert analysis.

"Yesterday, energy companies, in particular Gazprom, raised the question of using the national currency. We are ready to examine the possibility of selling energy resources for rubles, but our Chinese partners need rubles for that. We are also ready to sell for yuans," Putin said.

He stressed that "there should be a balance here."

On Tuesday, Russia and China agreed terms for Russian gas deliveries at a level of up to 70 billion cubic meters a year. China also imports oil from Russia.

The Russian prime minister said the issue would be addressed among others at a meeting of Shanghai Cooperation Organization (SCO) finance ministers, who are to convene before the end of the year in Kazakhstan.

Britain's Independent newspaper reported last Tuesday that Russian officials had held "secret meetings" with Arab states, China and France on ending the use of the U.S. dollar in international oil trade.

The countries are reportedly seeking to switch from the dollar to a basket of currencies including the euro, Japanese yen, Chinese yuan, gold, and a new unified currency of leading Arab oil producing countries.

The Independent said the meetings have been confirmed by Chinese and Arab banking sources.