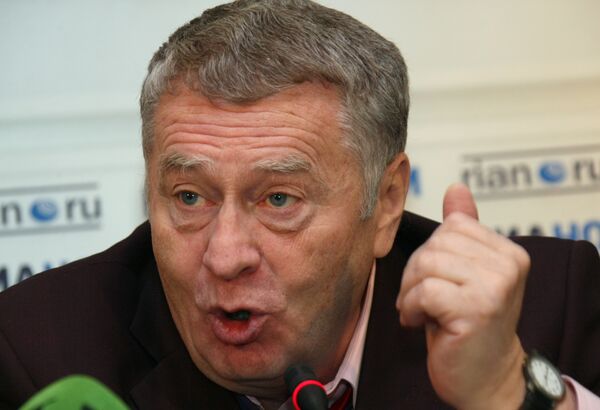 © Владимир Федоренко
/
Go to the photo bank
Subscribe
Russia's LDPR party called on Wednesday for a recount of the results of Sunday's regional elections, which were won by a landslide by the ruling United Russia party.

MOSCOW, October 14 (RIA Novosti) - Russia's LDPR party called on Wednesday for a recount of the results of Sunday's regional elections, which were won by a landslide by the ruling United Russia party.

"There is only one proposal - a nationwide vote recount," LDPR lawmaker Alexei Ostrovsky said.

All the opposition parties in the lower chamber of the Russian parliament - the LDPR, the Communists and the A Just Russia party - left the plenary session hall of the State Duma to protest the election results on Wednesday.

"We will return only after a meeting with the president," LDPR leader Vladimir Zhirinovsky said.

In elections to the Moscow City Duma, only two parties - United Russia and the Communists - managed to pass the 7% threshold.

"We also do not recognize the outcome of the elections and have left the hall," A Just Russia deputy head Oksana Dmitrieva said.

United Russia said the protest was an attempt by the opposition to find excuses for their poor showing in the polls.

"I think this is the only way they can explain their failure to the voters," a of United Russia deputy chief Valery Ryazansky told RIA Novosti.

Both the LDPR and the Communists said they had reported numerous cases of voting violations to the relevant bodies, but had received no reply. Communist Party leader Gennady Zyuganov said party monitors had reported "barbarity" on election day.

Russian media reported that OMON special forces officers had fired tear gas at residents of Dagestan's second city of Derbent, where around 14 of 36 polling stations failed to open on election day.