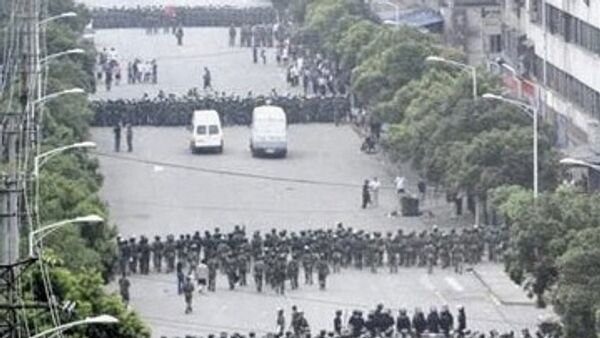 Urumqi was hit in July by its worst ethnic violence in a decade, which began when a group of protesters demanded an investigation into the death of two ethnic Uighurs during a fight with Han Chinese workers.

Official reports say 197 people died and 1,600 were wounded as the result of the riots.

The court said the six convicts "were found guilty of killings and other crimes committed during the riots," the news agency said, adding another man, also convicted of violent crimes in the riots, was sentenced to life in prison.

According to local media reports, a total of more than 200 people were brought up for trial. Hearings in the cases started in August.

A court in southern China sentenced a Han Chinese man to death on Friday for his part in the factory brawl in which two Uighur migrant workers died, sparking the unrest in Urumqi.

Chinese authorities claimed that the German-based organization, World Uyghur Congress, was the organizer of the riots, supporting separatists in the region.

Xinjiang is located in the far northwest of China, and borders Mongolia, Russia, Kazakhstan, Tajikistan, Afghanistan and the Pakistani- and Indian-controlled parts of Kashmir. The separatist East Turkestan Islamic Movement is active in the region.