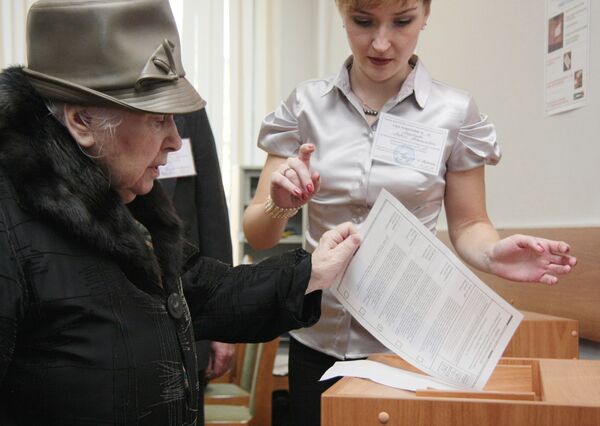 With almost 90% of votes counted in the elections to the Moscow City Duma, just two look set to pass the 7% threshold to receive seats in the assembly, election officials said on Monday.

MOSCOW, October 12 (RIA Novosti) - With almost 90% of votes counted in the elections to the Moscow City Duma, just two parties look set to pass the 7% threshold to receive seats in the assembly, election officials said on Monday.

The Moscow City Election Committee reported that the United Russia party of Prime Minister Vladimir Putin had 66.10%, with the Communist Party a distant second of 13.28%, enough for three seats in the 35-member chamber.

United Russia candidates also lead in all 17 of the single-mandate districts.

Amid general apathy about the election among Muscovites, turnout in Sunday's election was 34.72%.

Similar domination by United Russia was seen in regional and municipal elections across the country, with ruling party candidates forecast to receive 32 of 35 seats in the Irkutsk city assembly, and to win in several regional polls, including in Yakutia, east Siberia, and the Far Eastern Primorye Region, and numerous mayoral votes, including the southern city of Astrakhan and the Far East's Yuzhno-Sakalinsk.

In Chechnya, Grozny's first mayoral elections saw acting Mayor Muslim Khuchiyev confirmed in the post with more than 87% of the vote. In stark contrast to Moscow, turnout in the Chechen capital was reported at 91.48%.

In neighboring Dagestan, media reported widespread problems with mayoral elections in the city of Derbent, including the failure of many polling stations to open and police harassment of voters and journalists.