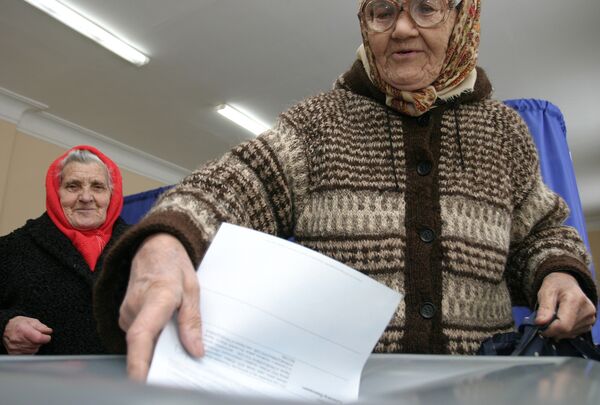 Russia voted on Sunday in regional elections, with the authorities saying everything went smoothly and the opposition claiming there were numerous violations.

MOSCOW, October 11 (RIA Novosti) - Russia voted on Sunday in regional elections, with the authorities saying everything went smoothly and the opposition claiming there were numerous violations.

Polls opened on Sunday morning for about 30 million Russians to vote in the elections to local authorities, held in 76 out of 83 Russian regions, including the North Caucasus republics of Chechnya and Ingushetia, which held their first municipal elections.

Moscow, the Republic of Mari El in the Volga Region and the central Tula Region were electing their parliaments, and preliminary results showed that the ruling United Russia party is widely leading in all of them.

In Moscow, United Russia was gaining over 60%, the Communists about 15% and the Liberal Democratic Party 7.5%. Other parties were gaining less than 7% of the vote, which gave them no chance to make it to the city legislature.

The opposition, in particular, said there were cases of ballot stuffing, and that the ruling party was given more opportunities during the election campaign. It also claimed that the Solidarity movement was unjustly denied registration over the accusation that it forged signatures it collected.

A total of 90,000 candidates were registered to run in the elections. Election commissions said the voter turnout in Moscow was 33%, and 86% in Chechnya. Chechen President Ramzan Kadyrov pledged on Friday that 99% of Chechen voters would go to the polls.

More than 75,000 police and over 3,000 interior troops were involved in security measures during Sunday's elections across the country.