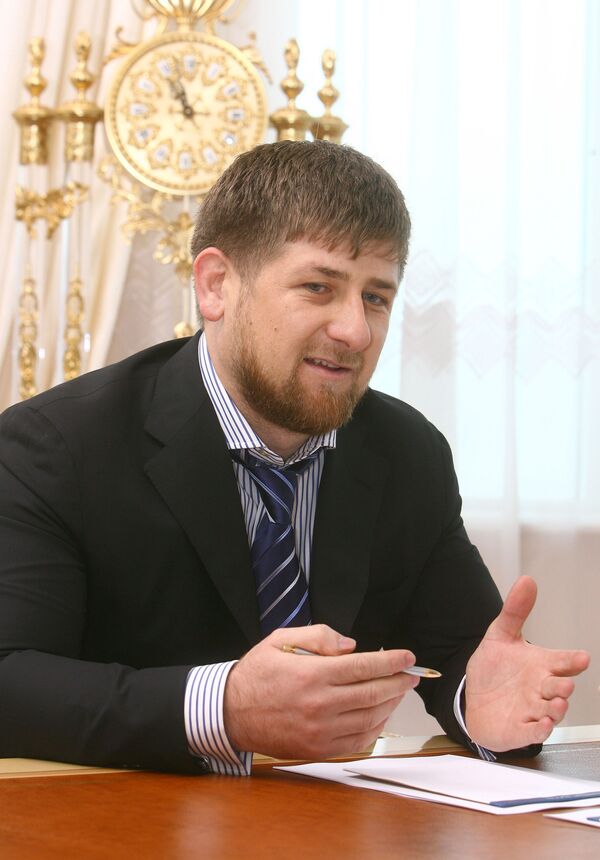 Chechen President Ramzan Kadyrov said on Tuesday he was satisfied with a Moscow court decision ordering the Memorial rights group and its head Oleg Orlov to pay him 70,000 rubles ($2,350) in libel damages.

GROZNY, October 6 (RIA Novosti) - Chechen President Ramzan Kadyrov said on Tuesday he was satisfied with a Moscow court decision ordering the Memorial rights group and its head Oleg Orlov to pay him 70,000 rubles ($2,350) in libel damages.

"I am pleased with the outcome. It would be wrong to ask whether I agree with the court ruling. Any law-abiding citizen must accept a court decision as the right one, since people go to court in the first place to establish the truth," Kadyrov said.

He said the idea "was not to punish Orlov."

"I sought from the very outset to explain to Orlov that he is wrong, and very politely and tactfully laid out my position on the issue," he said.

Orlov had accused Kadyrov of involvement in the murder of rights activist Natalya Estemirova in the troubled North Caucasus republic in July.

In the aftermath of the discovery of Estemirova's body, Orlov said : "I know, I am certain who is to blame for the murder of Natasha Estemirova. We all know this person. His name is Ramzan Kadyrov, the president of the Chechen Republic."

Orlov later said he had referred to Kadyrov's overall responsibility as president for the situation in the republic. He refused however to retract the accusation.

Estemirova, a leading Memorial researcher in Chechnya, was abducted outside her home in Grozny, Chechnya's capital, on July 15 and found shot dead in the neighboring republic of Ingushetia later the same day.

Her murder, which caused international outrage, was followed three weeks later by the killings of Zarema Sadulayeva and her husband, Alik Dzhabrailov, who both worked for a Chechen charity.

Kadyrov's lawyer said on Tuesday that his client has also filed a libel suit against the chief editor and several reporters at the Novaya Gazeta daily.

Andrei Krasnenkov said an article in the paper had linked Kadyrov to the killing of former presidential bodyguard Umar Israilov in Vienna in January.

Israilov fled Chechnya and was granted political asylum in Austria, where he was murdered on January 13, 2009, as the New York Times prepared to publish an article on his allegations, detailed in submissions to the European Court of Human Rights. The murder was one in a string of assassinations of high-profile critics of the Chechen leadership.

A former separatist who fought against Russia in the First Chechen War, Kadyrov and his security services have been accused of human rights abuses. He denies the allegations.